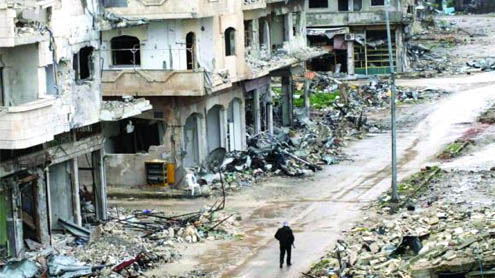 GENEVA: More than four million people inside Syria are in desperate need of aid, up from 2.5 million in September, the UN’s humanitarian agency said yesterday.

“We are watching a humanitarian tragedy unfold before our eyes,” Valerie Amos, the UN undersecretary-general for Humanitarian Affairs and Emergency Relief Coordinator, told reporters in Geneva.The number of Syrians who have fled their conflict-ravaged homeland has topped 850,000, the UN refugee agency said yesterday.“As of the 17th of February, we have over 850,000 Syrian refugees who are awaiting registration or have been registered,” agency spokesman Babar Baluch told reporters in Geneva.Only a year ago, the UN said 33,000 Syrians had fled the conflict which erupted in March 2011.

The UN has warned that refugee numbers could reach 1.1 million within months in what has become an increasingly radicalized civil war in the nation of almost 21 million.Most of the refugees have fled to neighboring Lebanon, Jordan, Turkey and Iraq.Russia yesterday sent two planes to Syria to pick up Russians wanting to leave the conflict-torn country as the navy dispatched four warships to the Mediterranean reportedly for a possible larger evacuation.Two emergencies ministry planes carrying humanitarian aid for Syria took off from Moscow for the port city of Latakia and would take any Russians wanting to leave on their flight back, the ministry said.

Meanwhile the Defense Ministry said Russia is sending four more warships to the Mediterranean Sea to join an escort ship and smaller vessels that are already on duty in the region.Observers are watching for any hints of Russia planning a full-scale evacuation of its citizens which would be seen as a tacit admission from Moscow that the regime of President Bashar Assad is doomed in its fight against the opposition.The Defense Ministry said in a statement to Russian news agencies that the ships would be on “military service” but gave no further details.

The aid consists of electrical equipment, bedding, tents as well as foodstuffs like fish and milk conserves as well as sugar.“Citizens of Russia and the (ex-Soviet grouping) CIS wanting to leave can leave Syria on these planes,” the ministry said, adding that the departure from Latakia back to Moscow was planned later yesterday.It said a hotline had been set up for Russians who were thinking of leaving Syria with psychologists on hand to take the calls.

The Interfax news agency quoted sources in the Russian community in Syria as saying that 150 Russians and other ex-Soviet citizens could be flown out on the planes.The voluntary evacuation would be the second such operation organized by Russia after it took out 77 people fleeing Syria on two planes flying from Beirut in neighboring Lebanon in January. However it would be the first directly from the territory of Syria itself.According to Russian media, 8,000 Russians are registered with the consulate in Syria but there could be as many as 25,000 Russian women who have married Syrians living in the country. – ArabNews