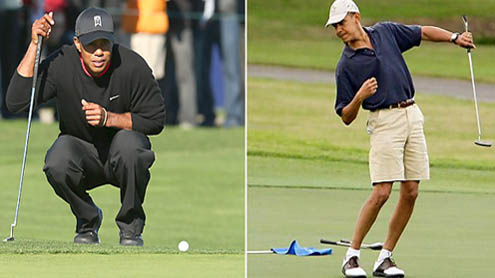 The White House Press Pool made a stink on Sunday after they were refused access to President Obama’s golf game with Tiger Woods in Florida.

Obama’s in the Sunshine State for three days while his wife and daughters are skiing in Colorado, and he must’ve signed up for the premium package because he took the course with the world’s second best player in what one sports pundit called a “historic day in golf.” Obama’s never played golf with Tiger Woods before, so the two titans probably had a lot of catching up to do. But we’ll never know what they said, since the White House insisted upon locking the press out of the resort.

It’s not like Obama snubbed reporters after a visit with a foreign head of state or anything, but the press pool was upset on principal. “Speaking on behalf of the White House Correspondents Association, I can say a broad cross section of our members from print, radio, online and TV have today expressed extreme frustration to me about having absolutely no access to the president of the United States this entire weekend,” said Ed Henry, president of the White House Correspondents Association. “There is a very simple but important principle we will continue to fight for today and in the days ahead: transparency.”

Burn. Just three days ago Obama boldly declared that his administration is “the most transparent in history.” That was read as a pretty dicey claim, especially after we just got finished learning about just how secretive the Obama administration has been about its drone program, despite calls from lawmakers and transparency advocates alike to share the rules of engagement with the public. Obama didn’t just make up that “most transparent in history” line, either. It’s the same one he used his very first day in office, when he promised “an unprecedented level of openness.” A few years into his first administration, many had their doubts about whether or not the president kept that promise.

So this isn’t really about not getting to take a picture of Obama bumping fists with Tiger. (In fact, there were no photos of the outing made available at the time of this writing — the picture above is from one of the president’s outings last year.) Nor is it about concocting some conspiracy theory about how the other two men in the game, U.S. Trade Representative Ron Kirk and Houston Astros owner Jim Crane, were whipping up some top secret espionage plans. They were probably all just talking about their fantasy basketball teams and trying to figure out a tasteful way to ask Tiger about his sex addiction. Or whatever it is masters of the universe talk about when playing golf. – YahooNews