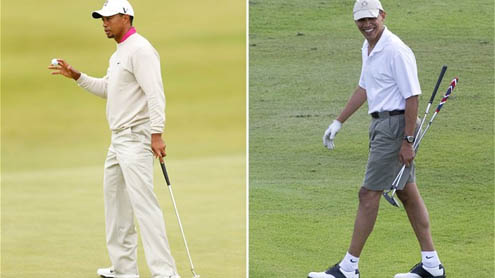 PALM CITY, Florida: President Barack Obama saw firsthand how golf is played at the highest level on Sunday, teeing off with Tiger Woods, the world’s No. 2 golfer who is rebuilding a once-squeaky clean image tarnished by a messy 2010 divorce.

Obama, an avid weekend golfer, and Woods, who won his 75th title last month, played together for the first time at the exclusive Floridian Yacht and Golf Club, which was surrounded by a cordon of security.”It’s good to see you play well again,” Obama told Woods, according to GolfDigest.com.Less than a month after starting his second term, Obama is on a three-day golf getaway in Florida, while his wife, Michelle, and their daughters, Malia and Sasha, are skiing in Colorado. On Saturday he received instructional tips from Woods’ former swing coach, Butch Harmon.

White House spokesman Josh Earnest said Obama and Woods were joined on the course by U.S. Trade Representative Ron Kirk and Jim Crane, the resort owner who also owns the Houston Astros baseball team.Tim Rosaforte, a Golf Channel analyst and Golf Digest writer, broke the news, tweeting that Woods holed out from a greenside sand bunker on the first hole.”Historic day in golf. Their first round,” Rosaforte said.There was no word on how Obama played.

Harmon, according to GolfDigest.com, said he saw the interaction between Woods and Obama on the range before teeing off. Obama congratulated Woods on winning the Farmers Insurance Open last month.”The president said to Tiger, ‘The last tournament you played was fun to watch. It’s good to see you play well again,'” Harmon said.The White House resisted appeals from reporters to allow the traveling press pool onto the grounds of the resort in order to record some part of the Woods-Obama round. Previous presidents have allowed some press access of presidential golf rounds.

The White House refusal prompted a protest from the White House Correspondents Association.”Speaking on behalf of the White House Correspondents Association, I can say a broad cross section of our members from print, radio, online and TV have today expressed extreme frustration to me about having absolutely no access to the president of the United States this entire weekend,” said WHCA President Ed Henry, a Fox News correspondent. “There is a very simple but important principle we will continue to fight for today and in the days ahead: transparency.”

The White House said in response that the press access granted was “entirely consistent with the press access offered for previous presidential golf outings” and consistent with the access promised prior to Obama’s arrival in Florida on Friday.Woods, who usually steers clear of politics, is the top-ranked American golfer and second in the world. He lives about an hour’s drive south of the Floridian club in Jupiter, Florida.

Woods’ image was tarnished after his extramarital affairs with other women came to light in 2009. He and his then-wife Elin Nordegren divorced the following year.Like many of his predecessors, Obama has escaped the pressures of the Oval Office by taking to the golf course. He has played more than 100 rounds of golf as president and typically tees it up with a group of close-knit friends. – YahooNews