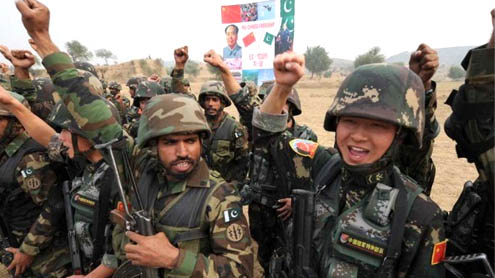 The “Exercise Aman-13” is scheduled to start in the North Arabian Sea March 4. Aman is an Urdu word meaning “peace”.The fleet, sent by the Chinese People’s Liberation Army (PLA) Navy, departed Saturday from a port in Qingdao of east China’s Shandong province to the Gulf of Aden and Somali waters for escort missions.

The 14th convoy fleet comprises three ships — the missile destroyer Harbin, the frigate Mianyang and the supply ship Weishanhu — carrying two helicopters and a 730-strong troop, all from the North China Sea Fleet under the PLA Navy.Since December 2008, authorized by the UN, the Chinese navy has organised 14 fleets to the waters of the Gulf of Aden and Somali waters to escort 5,046 Chinese and foreign ships.More than 50 Chinese and foreign ships have been rescued or assisted during the missions. – KahleejNews