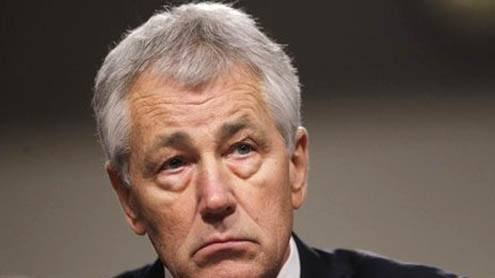 Republican senators have delayed a vote to confirm President Obama’s nominee for US secretary of defense.

They say questions remain about Senator Chuck Hagel but have agreed to an up-or-down vote later this month.Mr Hagel’s backers say the US military needs a leader in place while troops remain in Afghanistan and North Korea has just tested a nuclear device.Outgoing Secretary of Defense Leon Panetta is to remain in his post until Mr Hagel is confirmed.White House press secretary Jay Carney denounced the delay, saying Senate Republicans had put political posturing ahead of America’s national security.

“A clear majority in the US Senate supports Sen Hagel’s confirmation, so today’s action runs against both the majority will of the Senate and our nation’s interest,” he said in a statement.”This waste of time is not without consequence. For the sake of national security, it’s time to stop playing politics with our Department of Defense and to move beyond the distractions and delay.”But Republicans, who have agreed to a vote following an upcoming 10-day recess, have said they need more time to weigh outstanding questions about Mr Hagel.

South Carolina Senator Lindsey Graham also said he would continue to use the confirmation vote as leverage in his effort to wring more information from the White House about the response to the 11 September attack on a US consulate in Benghazi, Libya.Mr Hagel was a private citizen at the time of the attack.”There seems to not be much interest to hold this president accountable for a national security breakdown that led to the first ambassador being killed in the line of duty in over 30 years,” Sen Graham said.

“No, the debate on Chuck Hagel is not over. It has not been serious. We don’t have the information we need. And I’m going to fight the idea of jamming somebody through until we get answers about what the president did personally when it came to the Benghazi debacle.”One vote short.On Thursday, Republicans forced the delay with a parliamentary manoeuvre blocking the Senate Democratic leader’s motion to end debate on Mr Hagel’s nomination and proceed to an up-or-down vote on confirmation.Even though the Democrats command a majority of 55 votes, Senate rules in this case require them to come up with 60 to end debate. They fell one short.Mr Hagel, a decorated and twice-wounded veteran of the Vietnam War, served in the Senate for 12 years.

But correspondents say he is seen by some of his former colleagues as a renegade for breaking with Republican ranks on issues such as the Iraq War.He has also been criticised during the confirmation process for comments he made years ago claiming “the Jewish lobby” had too much influence over American policy.His remarks in 1998 that a nominee for an ambassadorial post was “openly, aggressively gay” have also raised eyebrows. Mr Hagel has since apologised for that comment. – BBC