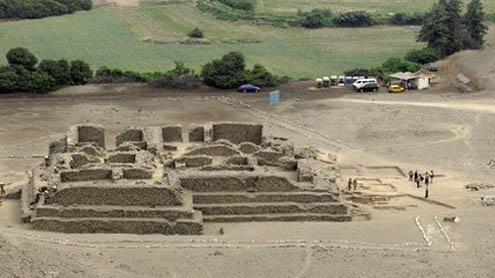 Archaeologists in Peru say they have discovered a temple at the ancient site of El Paraiso, near the capital, Lima.

Entry to the rectangular structure, estimated to be up to 5,000 years old, was via a narrow passageway, they say.At its centre, the archaeologists from Peru’s Ministry of Culture found a hearth which they believe was used to burn ceremonial offerings.With 10 ruins, El Paraiso is one of the biggest archaeological sites in central Peru.The archaeologists found the structure, measuring 6.82m by 8.04m (22ft by 26ft), in the right wing of the main pyramid.

They had been carrying out conservation work on the site on behalf of Peru’s Ministry of Culture when they came across the remains, which had been obscured by sand and rocks. They said the temple walls were made of stone and covered in fine yellow clay which also contained some traces of red paint.The archaeologists said the find suggests that the communities in the Late Pre-ceramic Age (3500 BC to 1800 BC) were more closely connected than had been previously thought.

Peru’s Deputy Minister for Culture Rafael Varon said the the temple was the first structure of its kind to be found on Peru’s central coast.”It corroborates that the region around Lima was a focus for the civilisations of the Andean territory, further bolstering its religious, economic and political importance since times immemorial,” Mr Varon said.Archaeologist Marco Guillen, who led the team which made the discovery, said the hearth gave insight into the civilisation which had used the site.

“The main characteristic of their religion was the use of fire, which burnt in the centre,” he told the BBC’s Mattia Cabitza in Lima.”The smoke allowed the priests to connect with their gods,” Mr Guillen said.The Paraiso settlement once supported a farming and fishing community numbering hundreds of people.Our correspondent says thousands of ruins are thought to remain undiscovered, making Peru a treasure-hunting destination for archaeologists and looters alike. – BBC