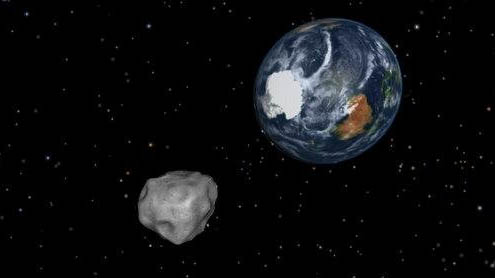 An asteroid as large as an Olympic swimming pool will race past the Earth on Friday at a distance of just 27,700km (17,200mi) – the closest ever predicted for an object of that size.

It will pass closer even than the geosynchronous satellites that orbit the Earth, but there is no risk of impacts or collisions.Its closest approach will be 19:25 GMT.For regions in darkness around that time, it will be visible using good binoculars or a telescope.The asteroid orbits the Sun in 368 days – a period similar to Earth’s year – but it does not orbit in the same plane as the Earth.As it passes – at a blistering 7.8km/s (17,450 mi/hr) – it will come from “under” the Earth and return back toward the Sun from “above”.As it does, it will pass over the eastern Indian Ocean, making for the best viewing in Eastern Europe, Asia and Australia.

But keen viewers anywhere can find one of several live streams of the event on the internet, including a feed from the Jet Propulsion Laboratory at Nasa, available from 19:00 GMT.2012 DA14 was first spotted in February 2012 by astronomers at the La Sagra Sky Survey in Spain – once a fairly small-scale, amateur effort to discover and track asteroids that has in recent years become a significant contributor to our knowledge of these “near-Earth objects”.They caught sight of the asteroid after its last pass, at a far greater distance.From their observations, they were able to calculate the asteroid’s future and past paths and predict Friday’s near-miss – which will be the closest the object comes for at least 30 years.

Alan Fitzsimmons of Queens University Belfast said that it is a scientific opportunity not to be missed.”When asteroids come this close, it’s very important to try to learn about them – it’s become so bright, so it’s so easy to study,” he told BBC News.”We get an additional insight into these small objects, which are the most likely impactors on Earth.”The notion that it is these smaller, tens-to-hundreds of metres-sized objects that pose the greatest potential threat to Earth is explored in the BBC feature article Can we know about every asteroid? .For skywatchers in the UK, the graphic below indicates roughly where in the southern sky to try to spot 2012 DA14. – BBC