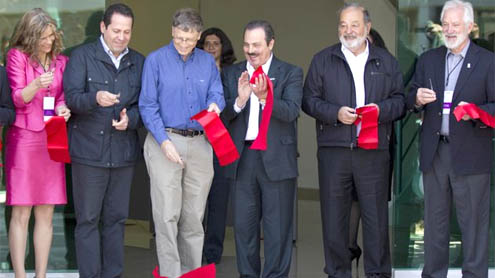 TEXCOCO, Mexico: The research center largely responsible for launching the “green revolution” of the 1960s that dramatically raised crop yields is getting support from the world’s richest men to develop genetically-modified seeds to help farmers in the developing world grow more grain in the face of a changing climatic conditions and increased demand.

Microsoft founder Bill Gates and Mexican telecom magnate Carlos Slim donated a total of $25 million to build a new cluster of biotechnology labs at the International Maize and Wheat Improvement Center in Mexico.The facilities include hothouses “with high-efficiency air particle filters and a water treatment plant to prevent pollen and genetically modified material from escaping to the outdoors,” according to a statement by the billionaires’ foundations.

Both of the philanthropists were on hand for Wednesday’s inauguration of the new labs at the research center, known as CIMMYT, located just east of Mexico City.It was yet another coming of age moment for GM crops, because the nonprofit CIMMYT has become known over the last 50 years for providing low-cost, improved seeds through hybridization efforts, using its vast stockpiles of native corn and wheat genes from across the world to cross-breed the best attributes, like drought-resistance.

But increasingly, genetic splicing is joining the older technique of cross-pollination as “one of the tools in the toolbox,” said CIMMYT Director Thomas Lumpkin.While Lumpkin claimed that even hybridization represents a sort of genetic modification by selective planting and breeding, he noted that CIMMYT hasn’t shipped any true GM seeds yet, and acknowledged that some countries might have concerns.”We want to facilitate the movement of those (genetic) traits to the countries of the developing world that request them, that want them,” Lumpkin said. “Nothing is being pushed, nothing is being forced, and CIMMYT will not profit.”

Gates noted there are “legitimate issues, but solvable issues” around wider GM crop use, and that solutions could include distributing GM crops that are patented but require no royalty payments.That alone would be a big change in the spread of GM crops, which up to now have been largely controlled by a few big biotechnology and agricultural companies that charge steep rates for GM seed and sue any farmer who uses, even accidentally, their patented GM traits, like pest resistance.CIMMYT, with its ties to farm agencies throughout the world, could be a conduit to deliver GM benefits to the developing world, which has largely been locked out of them.

GM traits could be developed by the center and donated, or they could be bought cheaply. That’s where Gates and his foundation could come in. With his help CIMMYT, which is known for charging farmers as little as possible, could pick up some of the older traits for low prices.”Some of these traits are getting near the end of their patent life or are available from multiple entities, so that there’s even some competition there,” Gates noted.Lumpkin said farmers may be scared by the legal risks of GM crops, noting “you can have a law suit of a million dollars” for unauthorized use of patented crops.

“So CIMMYT is primarily focusing on getting tried and true GMO traits that are widely used around the world and bring them to the poor farmers of the developing world, so that the women of the developing world don’t have to spend the entire cropping system pulling weeds in the field … when there is such a simple modification used by all of the farmers in the U.S., Argentina, Brazil, South Africa.””Why can’t these poor farmers have these same traits that have been used for 15 years in the developed world?” he asked.

Still national sensitivities in Mexico, where the CIMMYT was founded in 1963, are still strong. Mexico is the birthplace of corn, and concern that GM crops might displace or contaminate genetically-valuable native strains have so far held up large-scale planting of GM corn in Mexico, even as the country has been forced to import about half of its basic grain consumption.”Under the guise of philanthropy, what they are doing is promoting the use of transgenetic crops, with rhetoric about ending hunger in the world,” said Aleira Lara, of Greenpeace Mexico. “Those things are myths.”

“These (GM) seeds are not any kind of magic wand for increasing production, and they bring new problems to the countryside,” like developing resistance among pests and weeds, Lara said.Lumpkin noted that CIMMYT is already doing some GM corn research in Africa, but not in Mexico.”We are doing some research here with wheat, which is not such a sensitive issue in Mexico,” he said.

Lumpkin warned that the world could face a recurrence of the kind of crisis that CIMMYT was able to stave off 50 years ago, this time brought about by new plant diseases, climate change, water shortages and increasing consumption of grain-intensive foods, like meat.”On one hand, there is rapidly increasing demand … on the other hand, conditions for producing this food are deteriorating rapidly,” he said.Without new research avenues, he warned, “we have all of the ingredients for a new global food crisis.”