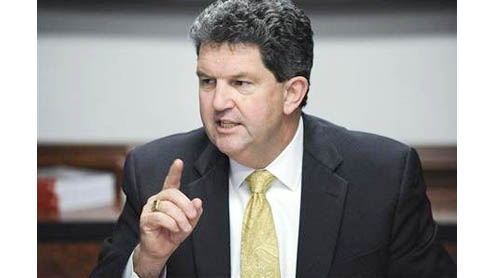 WASHINGTON: Postmaster General Patrick Donahoe pleaded with lawmakers on Wednesday not to block the financially strapped Postal Service from moving ahead with plans to end Saturday first-class mail delivery.

Last week, the Postal Service rattled lawmakers and other stakeholders when it announced plans to end delivery of first-class mail, magazines and direct mail on Saturdays, starting in August. The plan, the Postal Service said, would save the agency $2 billion a year when fully implemented.No law requires the Postal Service to deliver mail six days a week, but Congress included a provision in legislation to fund the federal government each year that has prevented the USPS from reducing delivery service.

The current funding measure expires in March, and would free the Postal Service to change its delivery schedule unless Congress prohibits it in the next spending resolution.But some lawmakers and trade groups have argued that the savings from this plan are too small compared to the $20 billion budgetary gap the Postal Service needs to fill.The Postal Service, which lost nearly $16 billion last year, has been grappling with tumbling mail volumes as Americans communicate more online, and has struggled under the weight of massive required payments for future retiree health benefits.

It has repeatedly urged Congress to pass legislation to restructure its operations and allow it to get on better financial footing.”The financial problems of the Postal Service are getting bigger every year,” Donahoe said at a Senate committee hearing. “Congress can avoid a future scenario in which the Postal Service requires a taxpayer bailout – which could be in excess of $45 billion dollars by 2017 if we don’t change our business model.”

Lawmakers at the hearing agreed that urgent postal legislation was necessary, but they were divided over how to save the Postal Service and whether the switch to five-day delivery is wise.Representative Darrell Issa, a California Republican who has been a leading proponent of new postal service legislation, said in testimony that other countries such as Australia, Canada, Finland and Spain have successfully shifted to five-day delivery, and the USPS can do the same and save money.

“It’s very clear that ultimately, either the rate payer or the taxpayer will have to pay the $20 billion in debt of the Postal Service,” Issa said.But Democratic Representative Elijah Cummings of Maryland, who opposes the plan to end Saturday first-class mail delivery, said the new schedule would not solve the Postal Service’s problems.”Unfortunately, the most significant challenge facing the Postal Service today is not Saturday delivery or declining mail volume or prefunding healthcare for its retirees. It’s Congress’s failure to act,” Cummings said. “Obviously, we cannot solve this problem if we continue to ignore it.”

The Postal Service pays $13.1 billion annually in healthcare costs, including mandatory payments into its future retirees’ healthcare fund. The Postal Service has blamed much of its financial troubles on this prefund mandate put in place by a 2006 law.Current laws, Donahoe said, limit the flexibility of the struggling mail carrier to implement changes that would help it become more profitable and offer new products and services. He wants lawmakers to allow it to control its own employees’ healthcare funding, which he said could save up to $7 billion annually.

“If legislation is not enacted – and soon – to provide the necessary reforms and flexibilities to achieve savings and generate new revenues, we will all be back here again, discussing the same issues,” Donahoe told the Senate Committee on Homeland Security and Governmental Affairs.Under pressure to cut costs and raise revenues, the Postal Service has eliminated more than 190,000 jobs over the last six years, reduced operating hours and is in the process of consolidating dozens of mail processing centers. But it still needs Congress to free its hands to handle more of its affairs.

Cummings said he is hopeful Congress can pass legislation by the end of March. But there were concerns that some of the proposals from lawmakers and the Postal Service could hurt rural communities, some of which do not have broadband access.”If we’re going to have a mail service that is going to work well for urban America, darn right it better work well for rural America,” said Democratic Senator Jon Tester of Montana. “The first thing we’ve done is cut service and I think that’s the worst thing we’ve done.”