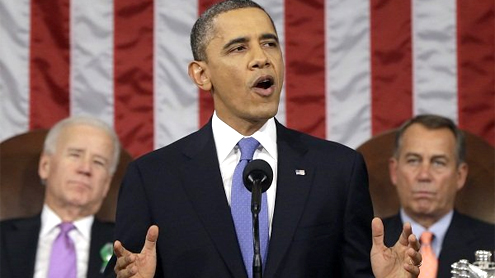 WASHINGTON: US President Barack Obama will announce in his State of the Union address on Tuesday that he will pull 34,000 US troops home from Afghanistan in the next year, a source familiar with his speech said.

The move will effectively halve the size of the current 66,000 strong US force in Afghanistan, ahead of a final withdrawal of most foreign combat troops by the end of 2014.The source, speaking on condition of anonymity so as not to preempt Obama’s remarks, said the president would undertake to make the withdrawals around the time of his next State of the Union speech next year.There were no immediate details of how quickly the drawdown would take place and the timetable will impact the number of troops NATO will have in place to fight the Taleban after the spring thaw in Afghanistan.

Debate is also taking place within the administration on the size of a residual force, to train Afghan soldiers and to conduct anti-terror missions, that will remain behind after the formal withdrawal.Last month, US officials suggested it was theoretically possible that Washington would leave no troops in the country, though some observers saw that move as a negotiating tactic with Afghan President Hamid Karzai in town.Obama has made ending the wars in Iraq and Afghanistan the centerpiece of his presidency, and often declares a long decade or more of American war is almost over. – KahleejNews