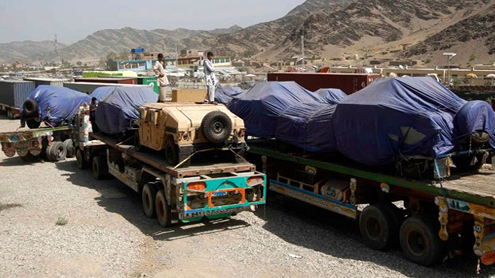 ISLAMABAD: The US has started using the land route through Pakistan to pull American military equipment out of Afghanistan as it draws down its troops in the country, US and Pakistani officials said on Monday.

The US moved 50 shipping containers into Pakistan over the weekend, said Marcus Spade, a spokesman for US forces in Afghanistan. The containers were the first convoys to cross into Pakistan as part of the Afghan pullout, he said.Pakistan will be a key route for the US to withdraw tens of thousands of containers of equipment out of landlocked Afghanistan as it pulls most of its combat troops out by the end of 2014.

Pakistan closed the route for nearly seven months after US air strikes killed 24 Pakistani troops at a post along the Afghan border in November 2011.Islamabad reopened the route in July 2012 after Washington apologised for the deaths.During the closure of the Pakistan route, the US had to use a longer, more costly path that runs north out of Afghanistan through Central Asia and Russia. The US has also used that route to withdraw equipment.

It’s unclear what took the US so long to begin withdrawing equipment through the Pakistan route, which runs south out of Afghanistan to the Pakistani port city of Karachi.Supplies have been flowing into Afghanistan since the route reopened in July 2012.Twenty-five containers that originated from a base in the southern Afghan district of Kandahar entered Pakistan through the border crossing at Chaman in southwestern Balochistan province on Saturday, said Ata Mohammed, a shipping official.

Another 25 containers entered Pakistan on Sunday through the other major Afghan border crossing at Torkham in the northwestern Khyber tribal area, said Mohammed Yousuf, a local political official.The US still has about 66,000 troops in Afghanistan, down from a high of over 100,000. As it pulls out of the country, the US will have to move an estimated 50,000 vehicles, as well as about 100,000 metal containers — each about 20 feet long.

There are also about 40,000 troops from other Nato countries in Afghanistan that will have to withdraw supplies and equipment as well.The top US military official, Gen. Martin Dempsey, said on Sunday that the US will aim to balance the protection of its forces and the achievement of its objectives in Afghanistan as it draws down its troops.