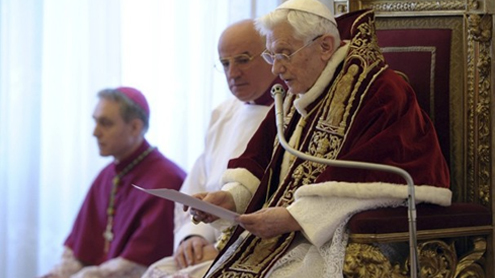 Rome: But that decision will not be made by Benedict, who will leave his post at 8 p.m. on February 28, said the Rev. Federico Lombardi, a Vatican spokesman.

“Before Easter, we will have the new pope,” he said.While Benedict won’t be directly involved in his successor’s selection, his influence will undoubtedly be felt. He appointed 67 of the 117 cardinals that — as of Monday — are set to make the decision.The number of electors could drop to 115, as two cardinals will turn 80 in March, when their age makes them ineligible to cast a vote. More than two thirds of whatever the final number must agree on the next pope, a decision that will be announced to the world in the form a puff of white smoke emerging from a chimney in the Vatican.

CNN Senior Vatican Analyst John Allen said that means the next pope, no matter where he is from, will probably continue in Benedict’s conservative tradition, which has seen the church take a firm line on issues such as abortion, birth control and divorce.The spiritual leader of 1.2 billion Roman Catholics, Pope Benedict XVI, surprised the world Monday by saying he will resign at the end of the month “because of advanced age.”

It’s the first time a pope has stepped down in nearly 600 years.”Strength of mind and body are necessary, strength which in the last few months has deteriorated in me to the extent that I have had to recognize my incapacity to adequately fulfill the ministry entrusted to me,” said Benedict, 85, according to the Vatican.

The news startled the Catholic world and led to frenzied speculation about who would replace him, including a debate about the merits of naming a pontiff from the developing world, where the church continues to grow, versus one from Europe, where it has deep historical roots.The pope, born Joseph Ratzinger, will first head to the pope’s summer residence before he likely retires to a monastery and devotes himself to a life of reflection and prayer, Lombardi said. He won’t be involved in managing the church after his resignation.

In a sign of just how rare an event this is, church officials aren’t sure what the pope will be called after he leaves the office.One possibility, Allen said, is “bishop emeritus of Rome.”While not quite unprecedented, his resignation is certainly historic. The last pope to step down before his death was Gregory XII, who in 1415 quit to end a civil war within the church in which more than one man claimed to be pope.

Benedict took months to decide that he wasn’t up for the job anymore, Lombardi said.”It’s not a decision he has just improvised,” the Vatican spokesman said.A family friend in Regensburg, Germany, told CNN that Benedict had been thinking resigning for some time because of his age. He had discussed the decision with his older brother, the Rev. Georg Ratzinger, according to the friend, who asked not to be named because he does not speak for Georg Ratzinger.

Several years ago, Benedict had suggested he would be open to resigning should his health fail, Allen said. But no one expected him to do so this soon.Jannet Walsh, a CNN iReporter from Murdock, Minnesota, counts herself among those “shocked” by the news of his resignation. But she said it was an admirable decision because he seemingly recognized that he could not adequately “carry out his office as pope” given his health.

“The resignation of the pope is actually a very selfless act, and it should be applauded,” Walsh said.Joseph Ratzinger was born and raised in Germany, where he briefly served in the Hitler Youth, despite his objections, and the German military during World War II. He then established himself as a leading theologian, professor and local Catholic leader before rising up the Vatican ranks.

He was dean of the College of Cardinals in 2005 when he became the sixth German to be picked as pope, albeit the first since the 11th century. At the time, the church was facing several pressing issues, including declining popularity in parts of the world and a growing crisis over the church’s role in handling molestation accusations against priests around the world.

Given his age at the time — 78 — he was widely seen as a caretaker pope, a bridge to the next generation after the long tenure of John Paul II, a popular, globe-trotting pontiff whose early youth and vigor gave way to such frailty in later years that he required help walking and was often hard to hear during public addresses.As an aide to John Paul, Benedict served as a strict enforcer of his conservative social doctrine. To no one’s surprise, he continued to espouse a conservative doctrine after taking the office himself. He frequently warned of a “dictatorship of relativism.”

“In a world which he considered relativist and secular and so on, his main thrust was to re-establish a sense of Catholic identity for Catholics themselves,” said Delia Gallagher, contributing editor for Inside the Vatican magazine.Not everyone embraced this conservatism. CNN iReporter Egberto Willies, a former Catholic, said positions such as opposing the distribution of condoms to curb the AIDS epidemic in Africa shows how “outdated” the church under Benedict was.

“This is a pope that was so conservative that many of his values simply, in today’s world, made no sense,” said Willies, a resident of Kingwood, Texas.Bill Donohue, of the conservative U.S. Catholic League, credited Benedict for working to reduce friction among adherents of various faiths, something that was a key part of John Paul’s mission as well.”The pope made it clear that religious freedom was not only a God-given right, it was ‘the path to peace,'” Donohue said.

But Mohammed Shafiq, chief executive of the Ramadhan Foundation, offered a different take. He referenced a 2006 speech Benedict made in which he quoted from 14th century Byzantine emperor Manuel II Paleologus saying the Muslim Prophet Mohammed brought into the world “things only evil and inhuman.” These remarks spurred protests by Muslims worldwide and an apology from the pope.”This sadly meant the hard work of his predecessor Pope John Paul II was tarnished and required extensive work to rebuild ties between Christianity and Islam,” Shafiq said. “That is something he has tried to do over the past eight years, and we do wish it could have started better than it did.”

In his tone, demeanor and actions, Benedict was notably different from his predecessor. Where John Paul wowed crowds around the world with his mastery of numerous languages, Benedict’s influence will be felt through his writings, part of his training as a college professor, Gallagher said.Allen called Benedict a “great teaching pope.”Benedict became pope at the height of the molestation scandal involving Catholic priests, with complaints of sexual abuse and lawsuits over the issue tearing at the church and threatening its moral standing around the world.

In 2008, he acknowledged “the shame which we have all felt” over abuse reports and said those responsible for the “evils” should face justice. Two years later in 2010 — the same year that he issued new rules aimed at stopping abuse — he said abusive priests “disfigured their ministry” and brought “profound shame and regret” on the church.The new rules included allowing church prosecution of suspected molesters for 20 years after the incidents occurred, up from 10 years previously. The rules also made it a church crime to download child pornography and allowed the pope to remove a priest without a formal Vatican trial.

“No one did more to successfully address the problem of priestly sexual abuse than Joseph Ratzinger,” Donohue said.But others — such as Barbara Blaine, president of Survivors Network of those Abused by Priests — say the opposite is true.”I would hate for him to be remembered as someone who did the right thing because from our perspective, Pope Benedict’s record has been abysmal,” Blaine said.In 2010, The New York Times reported that church officials, including Ratzinger, had failed to act in the case of a Wisconsin priest accused of molesting up to 200 boys. The Times reported that church officials stopped proceedings against the priest after he wrote Ratzinger, who was at the time the cardinal in charge of the group that oversees Catholic Church doctrine.

Ratzinger never answered the letter, according to the Times, and church officials have said he had no knowledge of the situation. But a lawyer who obtained internal church paperwork said at the time that it “shows a direct line from the victims through the bishops and directly to the man who is now pope.”Also in 2010, the Times reported that the future pope — while serving as the archbishop in Munich — had been copied on a memo informing him that a priest accused of molesting children was being returned to pastoral work. At the time, a spokesman for the archdiocese said Ratzinger received hundreds of memos a year, and it was highly unlikely that he had read it.

Victims’ groups are pressing the International Criminal Court to prosecute Benedict in the sex abuse scandal and say the resignation won’t change that, according to Pam Spees, of the public policy law firm Center for Constitutional Rights, which is helping SNAP pursue the case.In a statement issued Monday, Blaine said the church should choose a new pope dedicated to preventing sexual abuse by priests.

“For the church to truly embody the spiritual teachings of Jesus Christ, it must be led by a pontiff who demands transparency, exposes child-molesting clerics, punishes wrongdoers and enablers, cooperates with law enforcement and makes true amends to those who were hurt so greatly by Catholic priests, employees and volunteers,” she said.For others, the next pope must be someone who not only can satisfactorily address this scandal and other issues, but he also must be able to speak to all Catholics and others — especially younger people — in a way that resonates with them.

“I know that my grandparents think of the whole church a little bit differently than my generation does,” said Kaleigh Forst, a student, in New York City. “I feel like we could use somebody maybe a little younger, that has a new perspective.”Whatever his past, few expected Benedict to announce he was stepping down, including world and Catholic leaders, who voiced admiration for his decision and the man himself.U.S. Vice President Joe Biden, himself a Catholic, said he thought the pope set “an incredibly high standard” by understanding his own limitations and how they might affect the church.

“The decision reinforces for me as a practicing Catholic that this is a man of great integrity and looking out for what he believes is in the best interest of our church,” Biden said. “I admire him for it.”British Prime Minister David Cameron said Benedict “will be missed as a spiritual leader to millions.” Cameron’s Irish counterpart, Enda Kenny, praised Benedict for decades of leadership and service, as well as his decision to resign.

“It reflects his profound sense of duty to the Church, and also his deep appreciation of the unique pressures of spiritual leadership in the modern world,” Kenny said in a prepared statement.Archbishop Vincent Nichols, the president of the Catholic Bishops’ Conference of England and Wales, said the decision “shocked and surprised everyone.””Yet, on reflection, I am sure that many will recognize it to be a decision of great courage and characteristic clarity of mind and action,” he said.Archbishop Timothy Dolan, president of the U.S. Conference of Bishops, said he was startled, and sad, to see Benedict resign.”It’s like watching your own Dad get old and admit he’s not up to all the duties that being the head of a family involves,” Dolan said. “And there’s a somberness, there’s a sadness there.” – CNN