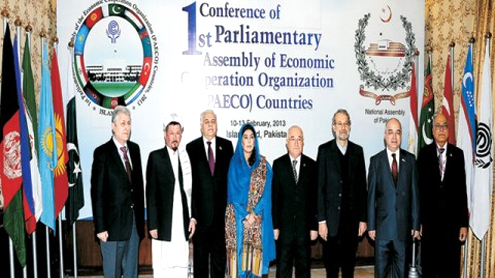 The speakers of the lower houses of the respective ECO member countries who are leading parliamentary while addressing the inaugural session of the conference resolved to fight poverty and regional crises in the region to establish peace and socio-economic development through enhanced cooperation.They said that the member countries PAECO would open a new window for cooperation providing a chance for close, active and continuous parliamentary cooperation.In her opening address, Dr Fehmida Mirza said that 10 ECO member states combine to form the largest repository of human and natural resources in the world.

“With a total area of around eight million square kilometres, inhabited by more than 400 million people, they represent over five per cent of the world’s land mass and six percent of its entire population,” she said.This, she said makes ECO nearly double the size of the European continent and almost equal in terms of its consumer market, adding the ECO countries serves as a bridge between the East and the West and makes it the trade corridor of the world.She said the adverse global and regional scenarios such as challenges concerning terrorism in all its forms and manifestations, intolerance and extremism have emerged as serious threats to the region’s stability, peace and security.

It is also because of these reasons that ECO has not been able to achieve its promised targets. She said five-year plan of action on energy cooperation in 2010 passed by ECO Ministerial Meeting yet waits implementation even after three years.“It is an irony that there remains a wide gap between the region’s abundant energy resources and the acute needs of its member states, especially Pakistan,” Dr Mirza said adding the intra- regional trade is less than US$ 50 billion.She observed that despite sharing common borders, the inability to develop effective and reliable transport systems have not allowed any two of our members states to become each-other’s leading trading partners.

She opined that these were the shortfalls, which have contributed to the rise of poverty, illiteracy, spread of disease, unemployment, environmental degradation and lack of opportunities.She also stressed the need to address the needs of the women and children, as their plight in ECO countries was a critical area of common concern.Dr Fehmida Mirza hoped that in the age of rapid transformation, the ECO region stands at a threshold of taking a quantum leap into an unprecedented future of unlimited opportunity and infinite hope.

Earlier, Dr. Fehmida Mirza and other visiting ECO states speakers signed the Charter that  envisages the assembly would comprise speakers and presiding officers of the ECO national parliaments. One branch of the Assembly would be formed in each parliament.The Assembly would comprise a General Conference, Executive Council and a Secretariat. The General Conference would annually meet in every member state, alphabetically on rotation basis and speaker of the host country shall be the president.The executive council, to meet prior to general conference, would decide Assembly’s program and budget, agendas for discussion and frame rules of the Assembly.

The permanent secretariat of the Assembly would be in Islamabad that would extend support to the country hosting the next general conference.Moreover, a General Fund would also be established for the PAECO Secretariat with the voluntary contributions from member states and other institutions and organisations. – Nation