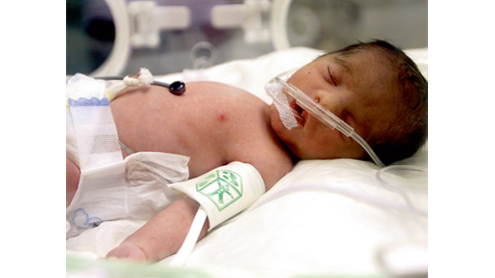 Four babies were expected but the fifth came as a total surprise for a young Syrian couple in Dubai on Monday.

The three boys and two girls, one of them a bundle of surprise, are the first children for the couple who have been married for four years. They were born at Saudi German Hospital.Quintuplets are very rare with an average estimate of one in 60 million births worldwide. In the UAE, this is the second known case after an Emirati gave birth to three boys and two girls in Al Ain in 2011.Born prematurely at 32 weeks (eight months) of pregnancy, the fraternal children weigh between 500-1,200 grams.

“We were told that my wife was going to deliver four children but when the doctor came out of the operation theatre, he informed me of the fifth baby,” said Hasan Mumzer, 33-year-old father of the children. “It was a big shock for us and I did not know whether to laugh or cry,” said Mumzer who works as a sound engineer for the Arabic language Al Aan TV. He said the children were conceived without any reproductive treatments or fertility drugs that are said to increase the chances of multiple births. “We did not have any children for the first four years of our marriage. Allah has blessed us with five at a go,” he said. Mumzer’s 29-year-old wife Ranim Amir Borak was recuperating from the surgery.

Dr Hassan Ali, Group Chief of Neonatology at the hospital, said the babies, though premature, were doing fine. “They all need incubators for the first few weeks of their lives which is important for their survival,” he said. “The presence of the fifth one was also a surprise for us since she did not show up in the earlier scans,” said Dr Hassan. He added that the children would be ready to go home in about six weeks.The father hoped that the government would partially help bear the cost of keeping the children in intensive care until they fully recover. – KahleejNews