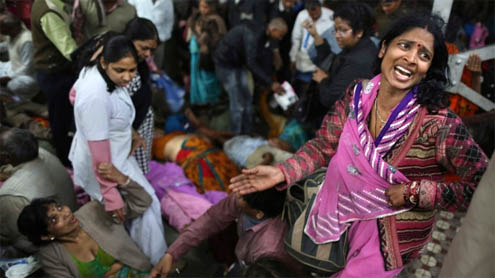 ALLAHABAD: At least 15 people died in a stampede on Sunday as pilgrims headed home from India’s giant Kumbh Mela festival, which drew a record 30 million people to the banks of the river Ganges.

The lives were lost at the main railway station where 10 corpses wrapped in white sheets could be seen on a train platform several hours after the incident which occurred in the early evening, an AFP photographer said. Dozens more were injured in the crush and some local television channels put the death toll as high as 20.Local officials said that the railings on a bridge at Allahabad station had given way under the pressure of the mass of people, while eyewitnesses told local media that the police had baton-charged the crowd leading to panic.

“People were taking rest on these railings and the railings could not take the load. The joints broke,” a spokesman for the local Uttar Pradesh state, Ashok Sharma, told AFP.The tragedy came at the end of a day, which organisers had earlier declared a success after a record number had taken a bath in the holy waters of the Ganges, which is said to cleanse pilgrims of their sins.

“By afternoon over 20 million people had taken the holy dip and by evening the numbers crossed 30 million,” top local official Devesh Chaturvedi told a press conference. Police had been stretched in controlling the vast crowds, he admitted, and one person had died for unknown reasons, while another later succumbed to injuries sustained in a crush.Thousands of volunteers on duty and police urged pilgrims to take one short bath and then leave the waters to make space for the flow of humanity behind them which stretched for kilometres (miles). – DailyMail