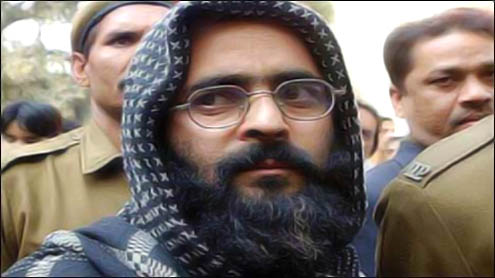 India executed a Kashmiri separatist on Saturday over his role in a deadly attack on parliament in 2001 after his final mercy plea was rejected by President Pranab Mukherjee, officials said.

Mohammed Afzal Guru, a former fruit seller, was hanged at Tihar Jail at around 7:30am (0200 GMT), becoming only the second person to be hanged in India in nearly a decade, officials said.“Yes, he has been hanged,” Home Secretary R.K. Singh said in brief comments.Guru was found guilty of conspiring with and sheltering the militants who attacked the parliament in December 2001, an incident that brought nuclear-armed India and Pakistan to the brink of war.

He was also held guilty of being a member of the banned group Jaish-e-Mohammed, which fights against Indian rule in the divided Himalayan region of Kashmir, where a separatist conflict has claimed up to 100,000 lives.Five armed rebels stormed India’s parliament in New Delhi on December 13, 2001, killing eight police officers and a gardener before they were shot dead by security forces. A journalist wounded in the attack died months later.Sources in the intelligence wing of the Indian army said they had been instructed to prepare for a possible backlash in Kashmir after Guru’s execution.

“We were informed that Afzal Guru will be hanged on Saturday and therefore we must tighten security,” a senior army official said on condition of anonymity.A former chief minister of Kashmir once warned that executing him would lead the country to “go up in flames” because of a backlash from rebels in Indian Kashmir.India alleged the militants behind the parliament attack were supported by Pakistani intelligence, leading the nuclear-armed rivals to deploy an estimated one million troops to their borders for eight months.

Guru’s conviction, which has been delayed on several occasions, was both highly political and hotly contested. He described his imprisonment as a “gross miscarriage of justice” in his mercy appeal to the president.A group of activists including lawyers have campaigned for him, saying his trial had major problems, including fabricated evidence presented by the police and the lack of proper legal representation.Protesters against his “unfair” conviction in Kashmir have held demonstrations demanding his release, while right-wing Hindu activists have long demanded his execution to send a message to other potential attackers.

The widows of the police officers killed in the attack handed back their posthumous gallantry medals and said they would only take them back once Guru was sent to the gallows.Guru was initially convicted along with Shaukat Hussain, a former student at Delhi University and S.A.R. Geelani, a New Delhi college teacher, who were also handed the death sentence, reserved for the “rarest of rare” cases in India.Their crimes were described as “horrendous, revolting and dastardly” by the Indian judge who tried them.

Guru’s wife, Afsan Guru, who was found guilty of not disclosing information to police, was also sentenced to five years in prison but had her conviction overturned on appeal.Geelani was also freed on appeal after two-years of imprisonment, adding to the doubts about the initial trial.Executions are only carried out for extremely rare cases in India and Guru’s would be only the second since 2004.The sole surviving gunman from the 2008 Mumbai attacks, Pakistani-born Mohammed Ajmal Kasab, was executed on November 21 last year. – KahleejNews