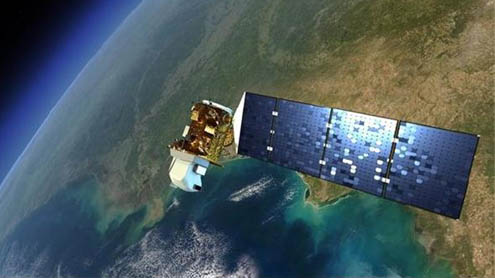 A new Earth-observing satellite is set to provide another watchful eye over our planet’s glaciers, forests, water resources and urban sprawl.

If all goes as planned, the Landsat satellite will be launched into orbit Monday from Vandenberg Air Force Base in California.It would be the eighth such satellite in a series designed to continuously track natural changes and society’s influence on Earth’s resources.Since the maiden launch in 1972, the satellites have been providing “uninterrupted observations,” David Jarrett, program executive at NASA headquarters, said during a pre-launch news conference on Friday.During the past 40 years, the Landsat satellites have been key in documenting changes to the Earth, pinpointing where droughts are occurring, how crops across the globe are faring and how erosion is affecting coastlines.

The satellites also have recorded retreating glaciers in Greenland, captured the 1980 Mount St. Helens eruption and recovery aftermath, tracked population growth in Phoenix and deforestation in the Amazon.Although NASA aimed for a Monday liftoff, launch director Omar Baez said there were two remaining engineering issues to complete. It was too early to know whether that would affect the launch schedule, he said.The newest Landsat will be the most powerful yet. Once in orbit, it will circle Earth 14 times a day.

It was expected to beam back 400 images a day to ground stations in South Dakota, Alaska and Norway. As in previous missions, the images will be freely available on the Internet.The $855 million project is managed by NASA and the U.S. Geological Survey. The space agency developed the satellite and its two sensors, which are more sensitive than previous ones. After a checkout period in orbit, day-to-day duties will be turned over to the USGS.The latest Landsat will build on past missions. The USGS recently retired Landsat 5, which operated since 1984 and has returned 2 ½ million images. Landsat 7, launched in 1999, continues to operate. – KahleejNews