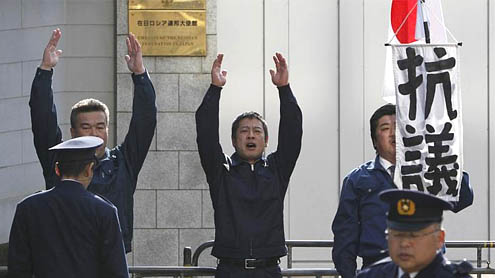 Japan lodged a protest after the planes were detected off the northern island of Hokkaido for just over a minute.The incident happened after Japanese PM Shinzo Abe said he was seeking a solution to a territorial dispute with Russia over a Pacific island chain.Russia’s military denied the incursion, saying the jets were making routine flights near the disputed islands.Mr Abe was speaking on the anniversary of an 1855 treaty which Japan says supports its claims to the islands.

The four islands – which Russia calls the Southern Kurils and Japan calls the Northern Territories – are the subject of a 60-year-old dispute.Because of the dispute, the two nations have not yet signed a peace treaty to end World War II.”Today, around 03:00 (06:00 GMT), military fighters belonging to Russian Federation breached our nation’s airspace above territorial waters off Rishiri island in Hokkaido,” the foreign ministry said.a panese F-2 fighter jets were scrambled, as the Russian Su-27 planes flew south over the Sea of Japan before turning back to the north, Japan’s Kyodo news agency said.

Defence ministry official Yoshihide Yoshida told journalists it was not clear whether the incursion was intentional or accidental, but described it as “extremely problematic”.Roman Martov, a spokesman for the Russian air force’s eastern district, was quoted by Russian media as saying the planes did not enter Japanese airspace.The flights were “strictly in accordance with international rules on the use of airspace and did not involve breaching the borders of other states”, he said.On Wednesday Russia’s Interfax news agency quoted military sources as saying Russian combined armed forces had begun scheduled exercises on the disputed islands.

Japan last reported an incursion by Russian aircraft in February 2008.Hours earlier, Mr Abe spoke to former inhabitants of the disputed islands and their descendants in a speech to mark Northern Territories Day, when rallies are traditionally held to call for the return of the islands.”In the telephone talks, I told [Russian] President [Vladimir] Putin I would make efforts to find a mutually acceptable solution so as to ultimately solve the issue of the Northern Territories,” he said.

In December, Mr Abe and Mr Putin agreed to restart talks on signing a peace treaty.Mr Abe is currently facing an escalation in a separate dispute with China over islands in the East China Sea.Japan, which controls them, calls them the Senkaku islands, China calls them the Diaoyu islands.The countries have disputed their ownership for years, but the row erupted again in September when the Japanese government bought three of them from a private owner. – BBC