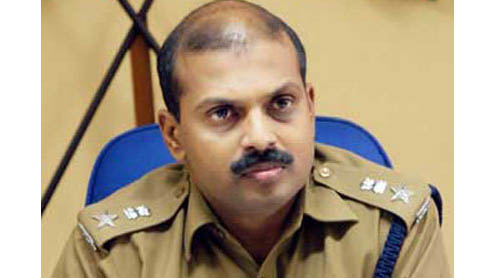 TRIVANDRUM: The drive by the Kerala police to cleanse the force of officials with a criminal record touched high level on Tuesday with the government suspending a Deputy Inspector General of Police (DIG).

DIG S Sreejith, who figured in the list of over 500 police officers with a criminal record, was suspended from service for his alleged links with controversial businessman K S Rauf, estranged relative of Industries Minister P K Kunhalikutty.Director General of Police K S Balasubramanian recommended suspension of Sreejith based on an inquiry conducted by Trichur Range IG S Gopinath. The charge against Sreejith was that he tried to frame a deputy superintendent of police in Malappuram district, who initiated a case against Rauf, in a bribery case.

The inquiry found that Sreejith had also tried to help Rauf take over a property owned by a Malayalee at Kudagu in Karnataka.After falling out with Kunhalikutty, Rauf had made certain fresh allegations in the ‘ice cream parlour sex scandal’ in January last year. He had alleged that Kunhalikutty had asked several key witnesses in the case to turn hostile and had offered them pecuniary benefits.

The scandal pertains to allegations that an ice cream parlour in Calicut district was used as a cover for running a sex racket in the late 1990s. Though Kunhalikutty never became an accused in the case, he had come under a cloud in the wake of the scandal and even had to quit the ministry then. The state police had kicked off the process of cleansing the force of men with criminal records by terminating the service of seven policemen, including two circle inspectors (CIs), for grave misconduct.

The two CIs who were dismissed were T.V. Subramnian (38) and K.M. Prasad (40). The charge against Subramanian is molestation of a 45-year-old woman in a moving bus near Trichur six months ago. Based on the complaint of the woman, an investigation was conducted and the CI attached to Rapid Action Force of the state police was found guilty. He is now under suspension.

The other circle inspector, attached with the State Women’s Commission, had allegedly sought sexual favours from a young woman for the proper inquiry on the petition she had filed against her husband. The inquiry against the official found that he had been harassing the woman for not yielding to him.The panel of ADGPs, headed by T.P. Senkumar, had recommended termination of service of the five others for their links with criminal gangs, including sand mafias. The recommendation followed a departmental inquiry.

These officials were among 536 policemen with criminal records identified on the direction of the high court. Apart from Sreejith, they included one ADGP (now retired), one inspector-general, a superintendent of police, 19 sub-inspectors and 55 additional sub inspectors. – KahleejNews