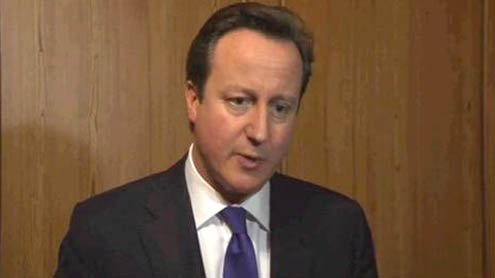 David Cameron suffered a humiliating reverse last night when more than half his MPs rejected his 11th-hour appeals for support for same-sex marriage.

On an extraordinary day in the Commons, 134 Tory MPs took advantage of a free vote to oppose the plans. Only 126 backed the legislation, with 35 abstaining.But with the help of the majority of Labour and Liberal Democrat MPs Mr Cameron saw the measure passed easily, by a margin of 400 to 175. The first gay marriages are likely to be conducted within 12 months.The standard bearer of the Tory Right, Iain Duncan Smith, voted in favour of same-sex unions, but the Government’s top lawyer, Dominic Grieve, astonished colleagues by abstaining.

A source close to Mr Grieve said: ‘He is a practising member of the Church of England and it has caused a lot of hurt and upset for the church.’Cabinet ministers who voted against the measure included Environment Secretary Owen Paterson, who told colleagues that ‘biddies don’t like botties’, and Welsh Secretary David Jones.They were joined by Simon Burns, Esther McVey and John Hayes.Mr Cameron has been accused of needlessly splitting his party and prioritising an issue important to only a handful of voters. One poll suggests 70 per cent of voters now see the Tories as divided.

Despite the vote being deemed one of conscience, Tory MPs had been left in no doubt that the party leadership wanted as many as possible to vote in favour.Senior ministers including George Osborne, William Hague and Theresa May were wheeled out on the eve of the debate to make the case.Senior Tories had suggested before the vote it was crucial for Mr Cameron to win over more than half of his party – a benchmark he failed to meet.

However, several Tories who rejected the measure said they objected to being described as ‘rebels’, since it was a free vote. Labour also suffered a split, with 22 of its MPs voting against.A handful of Liberal Democrats – including former children’s minister Sarah Teather – did likewise.The Prime Minister said: ‘I am a strong believer in marriage. It helps people commit to each other and I think it is right that gay people should be able to get married too.

‘This is, yes, about equality. But it is also about making our society stronger. I know there are strong views on both side of the argument – I accept that. But this is an important step forward for our country.’But Graham Brady, the chairman of the Conservative backbench 1922 Committee, expressed doubts over the Government’s assurances that faith groups will not be forced to conduct gay marriages.And Cheryl Gillan, the former Welsh secretary, said: ‘This legislation was not in our manifesto, it was not in the coalition agreement and it was not in the Queen’s speech.’

She warned the Conservatives risked alienating mainstream voters in the same way as US Republicans if they failed to embrace social changes such as equal marriage.The MP for Stourbridge, who is gay, told the Commons: ‘My party should never flinch from the requirement that we must continue this progression, otherwise we may end up like the Republican party who lost an election last year that they could have won were it not for their socially conservative agenda.’Deputy Prime Minister Nick Clegg said: ‘We will look back on today as a landmark for equality in Britain.’

Labour leader Ed Miliband said: ‘This is a proud day and an important step forward in the fight for equality in Britain.’Colin Hart, of the Coalition for Marriage, which has opposed the legislation, said: ‘This result is a disaster for David Cameron. Despite a personal plea from the PM his MPs have overwhelmingly rejected gay marriage. Mr Cameron must think again.’Last night was not the first time Mr Cameron has gone into the Commons division lobbies with a minority of his MPs over gay rights.In 2007, on a free vote, he was among fewer than half of his party who supported gay adoption.The previous biggest Tory split on a free vote was under Mr Duncan Smith in 2003, when the party split over reform of the House of Lords.Tony Blair suffered a bigger loss of support over foxhunting in 2004. – DailyMail