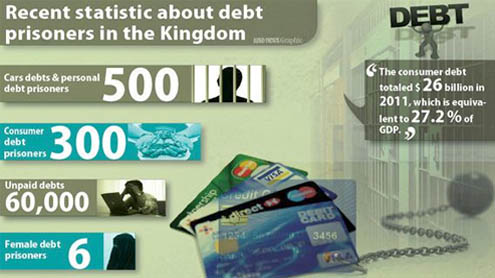 About 60,000 Saudis are unable to pay off their loans, said Abdullah Marei bin Mahfouz, chairman of the Jeddah branch of the national committee for the care of prisoners and their families.

Bin Mahfouz said that currently about 300 Saudis are imprisoned in the Kingdom who are unable to settle their bank debts. In addition, about 500 prisoners are unable to pay off credit card debts, and car installments.Between 2009 and 2011 the increased effectiveness of the payment system — which protects the rights of banks — contributed to lowering the number of people who borrowed money to buy consumer goods, he said.

“I think Saudis are becoming more cautious about getting indebted due to the strict procedures that banks are following. Still, too many Saudis make debts to fund their summer vacation or to buy a luxurious car,” he said.He added, “The majority of Saudis who are unable to refund their debts, start looking for another source of money, like car companies. They buy two or three cars on an installment system. Then they sell these cars for cash. In most cases the borrowers are unable to refund the car installments.”

According to Bin Mahfouz, sometimes husbands make their wives borrow money for them.“We currently have six women in prison that were unable to repay their debts. They work as teachers and their husbands forced them to take out bank loans, knowing they would be unable to refund it,” he said.The bank system is extremely strict in collecting the debts on time.“When the money is not repaid in due time, the bank freezes the account, stops all electronic transactions of the debtor, and then sends them notifications through the police department,” said Bin Mahfouz.

He added, “Most convicts who are in jail because they couldn’t repay, are Saudis. Expatriates are committed to settling their debts. There are a few Filipino debtors in prison. These are locked up because of credit card debts for amounts starting around SR 10,000. In contrast, Saudis debtors in jail run debts from SR 100,000 and more.”The Saudi Arabian Monetary Agency (SAMA) recently issued a report on consumer debts. It said these reached SR 246.9 billion in the first quarter of 2012. Compared to the same period in the previous year, the number was up by 19 percent.

SAMA had warned banks against rescheduling unpaid debts of individuals, saying that 45 percent of the debts should be repayable within three years.Saudi Banker Fadhel Albu Ainain told Arab News that the ratio of consumer debts is high; many people are in debt. He expected the ratio to decrease with the entrance of the mortgage law.“In Saudi Arabia the rate of consumer debts, used to buy consumer goods, is estimated at about 75 percent. This is unhealthy for the Saudi market.

A healthy market would show that most of the loans are used for acquiring stable commercial investments and real estate. Unfortunately, most of the borrowers are employees whose their salaries can’t cover these loans,” he said. “The problem in Saudi Arabia is that people who earn a low wage often tend to incur debts to live a luxurious life.”Albu Ainain is opposed to increasing the payment period to more than five years.“Some people are now calling for expanding the debts repayment period to more than five years. There are also calls to increase the maximum amount people can borrow. This is would increase the size of loans and weaken people’s ability to repay their debts,” he said. – ArabNews