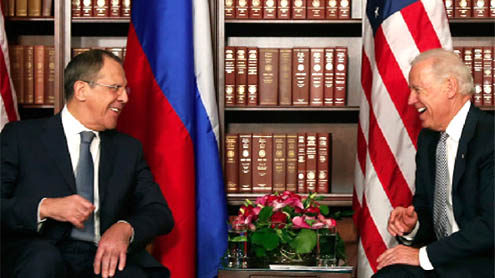 Biden and Lavrov met on the sidelines of the 2013 Munich Security Conference.”The vice president emphasised the importance of the two countries working together in the interest of international peace and security, including in Syria,” the White House said in a statement.

Biden noted that while the US and Russia “will continue to have serious differences” including, among other things, on human rights and the recent ban on adoptions of kids by US families, American and Russian leadership was “necessary to achieve practical solutions to the challenges facing the world today”, the statement said.

Lavrov said after the meeting with Biden that Moscow hopes Washington will take no more steps affecting bilateral relations.Late last year, Washington introduced the Magnitsky Act, a law imposing sanctions on Russian officials suspected of human rights abuses.Russia responded by banning US citizens from adopting Russian children and prohibiting Russian non-governmental organisations from accepting financing from the US. – KahleejNews