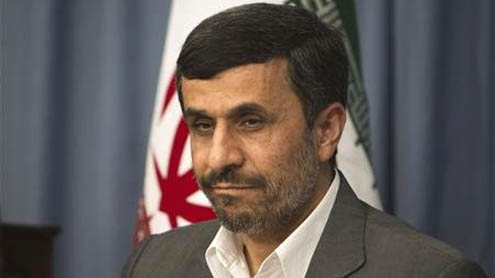 DUBAI: President Mahmoud Ahmadinejad accused the parliament speaker’s family of corruption on Sunday, turning a long-standing rivalry between two of Iran’s most powerful figures into a face-to-face feud, months before an election.

Addressing parliament to defend one of his ministers against impeachment, Ahmadinejad went on the attack, playing astonished lawmakers a recorded conversation with the brother of the speaker that he said implicated the whole family in corruption.Speaker Ali Larijani is a likely frontrunner to succeed Ahmadinejad at a June election but a financial corruption scandal could damage his standing among voters struggling with an economy battered by Western economic sanctions.

Under Larijani’s chairmanship, parliament has been hostile to Ahmadinejad for most of his second four-year term and on Sunday it voted to dismiss Labor Minister Abdolreza Sheikholeslami over his decision to appoint Saeed Mortazavi, a former prosecutor accused of links to the deaths of prisoners, to a new job.Ahmadinejad played what he said was a recording of a conversation between Mortazavi and Fazel Larijani, the speaker’s brother, that proved the family had used the prominence of the five Larijani brothers for economic gain.

But the recording was inaudible and Ahmadinejad read out what he said was a summary.He said Fazel Larijani had implied to Mortazavi that he could use his brothers’ influence to remove obstacles in return for involvement in some business endeavors.”These are audio and video, and the tape is clear,” said Ahmadinejad, according to the Iranian Students’ News Agency (ISNA). “If the honorable parliament speaker sees fit, we can turn over the 24 to 25 hours (of recordings) to you.”

Ali Larijani fired back at Ahmadinejad, saying the president’s accusations had nothing to do with Sheikholeslami’s impeachment, and denying the charge of corruption.”Our problem is that our president does not observe the basics of proper behavior,” Larijani said. “Why did you discuss this issue here?”Larijani continued: “Actually it’s a good thing … that you played this tape today, so that the people better understand your character.”

At this remark, the chamber erupted in jeers. At one point, Ahmadinejad asked to speak again, a request Larijani denied, and Ahmadinejad left the chamber and lost the impeachment vote.Fazel Larijani told the Fars news agency he would file a legal complaint against Ahmadinejad and Mortazavi for “spreading lies and disturbing public opinion.” Iran’s judiciary chief is Sadeq Larijani, brother of Fazel and Ali.

“This was a conspiratorial step and hypocritical action taken so that Mortazavi could use it as leverage,” Fazel Larijani told Fars. “I’m not the first person to be attacked by these Mafia-like individuals.”Fazel Larijani told the Mehr news agency he would hold a news conference on Monday to address the accusations.

Under increasing pressure from rival hardline factions, not least the judiciary and parliament run by the Larijanis, Ahmadinejad has hinted several times over recent months that he had evidence of corruption among high-level officials, but had until now declined to give any specifics.His many critics in the conservative-dominated parliament accuse the government of adopting policies that have exacerbated the economic problems caused by sanctions imposed by the United States and Europe over Tehran’s nuclear program.

In November, parliament called off plans to summon Ahmadinejad for questioning for what would have been only the second time ever, after Supreme Leader Ayatollah Ali Khamenei called for greater unity among officials.Having served two consecutive terms, Ahmadinejad cannot run in the June election, but analysts say he may try to maintain his influence even after leaving office.

Mortazavi was suspended from his judicial post over the torture deaths of three protesters in custody after the 2009 presidential election, which the opposition claimed was rigged in Ahmadinejad’s favor, bringing huge crowds onto the streets.Sheikholeslami appointed Mortazavi last year to head the social security office, against the lawmakers’ wishes.