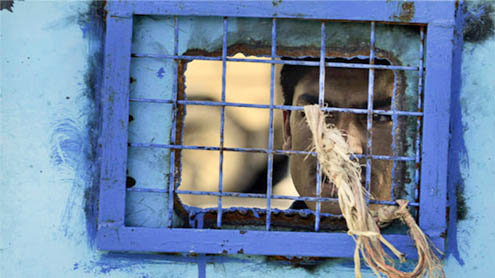 A Jan 20 UN report found that more than half of 635 pre-trial detainees and prisoners convicted on national security grounds had been tortured or ill-treated while in Afghan government custody.The Afghan government dismissed as ‘exaggerated’ the findings of the UN report which concluded that government reforms – including better monitoring and training but no dismissals or prosecutions – had not significantly reduced torture.Instead, officials who engage in torture benefit from complete impunity from prosecution.

On Jan 22, President Hamid Karzai ordered an investigation to determine whether there were abuses in detention and identify perpetrators.’The new UN report should sound alarm bells for the Afghan government to take decisive action to end torture,’ said Brad Adams, Asia director at Human Rights Watch.’President Karzai needs to deliver on his recent promise to identify perpetrators of torture and to make sure those responsible are immediately arrested and prosecuted.’

The January report follows up an October 2011 UN report documenting systematic and widespread torture in Afghan detention centres.Torture of prisoners in Afghan government custody has been regularly documented over the past decade, including by the Afghan government’s independent human rights commission as well as by Human Rights Watch and other NGOs.In his Jan 22 order, Karzai created a task force to investigate the report’s findings and respond within two weeks ‘so that follow-up measures can be taken’.

Unfortunately, Human Rights Watch said, the task force consisted almost entirely of Afghan government officials who have little or no human rights expertise, and includes representatives of the state agencies with the worst records on torture.’This government task force is little more than window dressing because it lacks the personnel, expertise and political will to credibly tackle the very serious problem of torture in Afghanistan’s detention facilities,’ Adams said.

‘Afghanistan needs a fully independent and permanent anti-torture body staffed by experienced human rights advocates with the resources and powers to conduct long-term and consistent monitoring and reform.’The UN report found that torture was most common in detention facilities run by Afghanistan’s intelligence service and police.Since the 2011 report, abuses in police custody have actually increased, while there was some reduction in intelligence service abuses.

A quarter of torture victims were children. Almost a third of the 79 interviewees who had been handed over to Afghan authorities by international military forces reported torture or ill-treatment in Afghan custody.Detainees told the UN investigators that torture was typically used to try to elicit confessions.

Fourteen different forms of torture were reported including suspension from ceilings, prolonged and severe beating including on the soles of the feet, twisting of the genitals of male detainees, electric shock, prolonged standing or forced exercise, prolonged exposure to cold weather, and threats of execution and rape.Many detainees described being subjected to varied and escalating torture if they refused to confess or answer questions in a way that satisfied interrogators. – KahleejNews