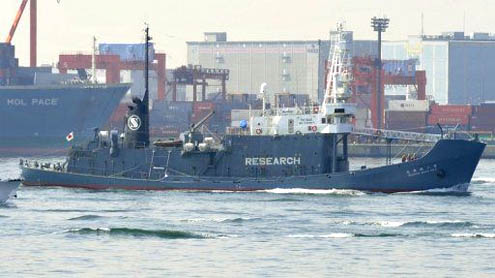 Australia has protested to Japan after a vessel from its whaling fleet entered Australia’s exclusive economic zone in the Southern Ocean.

Environment Minister Tony Burke said Australia had made it clear to Japan that whaling vessels were not welcome.Japan’s fleet hunts whales each year as part of what it says is a scientific research programme.Australia is taking legal action against the whaling in an international court.There has been a ban on commercial whaling for 25 years, but Japan catches about 1,000 whales each year for what it calls research. Critics say it is commercial whaling in another guise. The vessel – a support ship providing security to the whalers – was sailing near Macquarie Island.

“The government strongly objects to whaling vessels passing through Australian territorial seas or our exclusive economic zone,” Mr Burke said in a statement late on Thursday.”Our embassy in Tokyo has conveyed these sentiments directly to the Japanese government.”The Japanese fleet set sail for the Southern Ocean late last year. It aims to catch up to 935 minke whales and up to 50 fin whales.

In recent years, however, it has ended the season well short of these numbers because of disruption caused by conservation group Sea Shepherd, which follows the fleet south each year.Last year the whalers were granted an injunction by a US court banning Sea Shepherd from coming within 500 yards. Sea Shepherd have questioned the legality of the ruling and have sailed south to track the fleet. – BBC