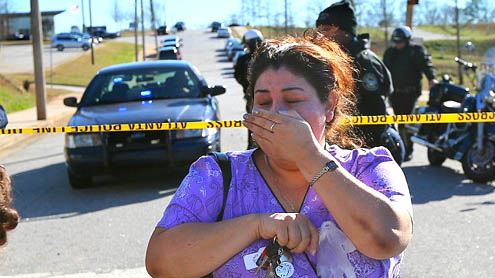 A 14-year-old male student was shot in the head, near the back of the neck, in a violent outbreak at an Atlanta public school on Thursday around 1:50pm.

The shooting occurred at the Price Middle School, in southwest Atlanta. A teacher also suffered minor injuries in the violence but was not shot.Atlanta Police have taken one suspect, another student, into custody.The school was put on lock down and parents anxiously waited outside the school.The students were corralled into the school’s auditorium while police investigated. They were not released until 3:45pm, the school’s normal dismissal time.

The students were going to be transported, via school buses, to a nearby Baptist church. Parents were told to pick up their children at the church parking lot.Atlanta Public Schools public information officer Steve Alford told WXIA-TV that the wound was toward the back of the neck and the student was described as being alert, conscious and breathing when he was taken to Grady Memorial Hospital.The teacher who was injured could have been trampled in the melee during the shooting. The teacher was treated at the scene,The suspect has been tentatively identified as a student. – DailyMail