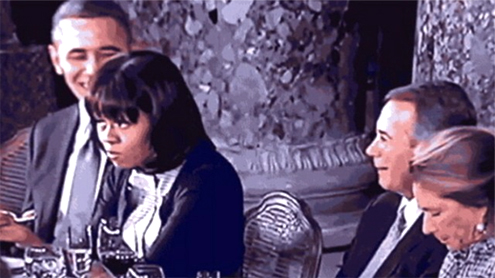 Monday’s post-inaugural luncheon was a case study in body language–and nearly all of the physical evidence centered on House Speaker John Boehner.

One interaction in particular already became an Internet meme: Michelle Obama rolling her eyes after listening to a comment from the Ohio Republican congressman.Tumblr blogger “Mattyrab” was the first to capture the eye roll in action, sharing video of the exchange in a display described as a “historical moment in shade throwing.” The video has already been shared thousands of times across social media sites with viewers speculating on what sparked the First Lady’s facial expression.

We don’t have audio of their exchange so, for now, it’s impossible to know exactly what Boehner had said. In fact, it’s entirely possible that Michelle Obama’s eye roll was simply a reaction to an innocuous joke from Boehner.That moment was only one of several interactions involving the House speaker. For example, after Boehner’s brief and gracious remarks during the luncheon, he shook hands with President Obama and Vice President Joe Biden. Anyone watching the two exchanges closely would notice a distinct difference: While Boehner and Obama look friendly enough in the actual handshake, at no point do they appear to make eye contact; in contrast, Biden and Boehner appear to share a warmer greeting, smiling at each other and pulling in close.

Of course, any analysis is inevitably colored by one’s own estimation of these three men. But it certainly appears to correlate with the understanding that Biden has far more amicable relations with Congress than Obama.Interestingly, House Majority Leader Eric Cantor even appeared to have a warmer exchange with Obama after his remarks than the president had with Boehner, as the two men looked each other in the eyes and traded what appeared to be firm, but friendly, greetings. If that indeed is the case, it’s noteworthy since Cantor is viewed as being even more ideologically opposed then the House speaker to Obama’s political agenda.

What do you think? Are political audiences overreacting to Michelle Obama’s facial expression? Or was it a candid moment captured on film showing that even during the most benign of political events, personality conflicts and personal feelings rise to the surface? – YhooNews