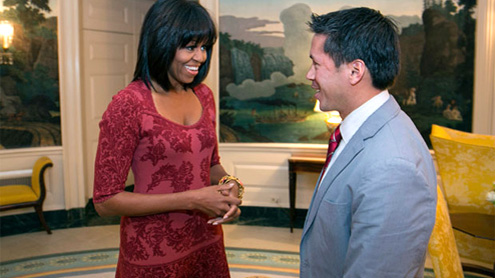 There’s something a little different these days about Michelle Obama: bangs in her hair.

The first lady’s office posted a picture of Mrs. Obama’s new do on her new Twitter feed Thursday. It shows her meeting at the White House with one of eight citizens named co-chairs of President Barack Obama’s inauguration.

The last time Mrs. Obama was seen in public, earlier this month when she and her family returned from Hawaii, her dark, shoulder-length hair was held away from her face by a headband. Her next public appearances will come Saturday, when she helps kick off several days of inaugural festivities.Thursday turned out to be a busy day for the first lady. Along with the new Twitter presence, she celebrated her 49th birthday. – KahleejNews