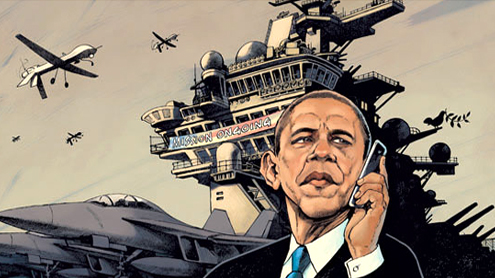 WHITE HOUSE: President Barack Obama has opportunities and major challenges going into his his second term both at home and abroad.

Creating jobs and bolstering the economy will still be the president’s top domestic goals in his second term. But he is unlikely to get cooperation from opposition Republicans.On one major issue, raising the national debt limit, Obama is standing firm.”We can arrive at a package that gets this thing done.  I am happy to have that conversation but what I will not do is have that negotiation with a gun at the head of the American people,” he said.Sparked by last month’s massacre of 26 children and teachers in a Connecticut school, Obama’s second term agenda includes gun control legislation.Already, the National Rifle Association is attacking the president for proposing new gun controls.

Obama is also determined to achieve immigration reform, an unfinished first term goal. It will require coalition building on Capitol Hill.”We need to seize the moment, and my expectation is that we get a bill introduced, and we begin the process in Congress very soon after my inauguration,” he said. John Hudak at the Brookings Institution predicts Obama will seek results any way he can. “I think what the president wants most is for a Democrat to succeed him, and the best way for a Democrat to win the White House in 2016 is for him to be essentially a beacon of policy, to get things done,” he said.

Overseas, in Afghanistan, Obama will oversee the scheduled withdrawal of U.S. troops in 2014.Iran’s nuclear program and potential Israeli military action may require critical decisions as could the violent conflict in Syria. Analysts expect Obama to be cautious in deploying U.S. military assets, relying on international partners.”There may be instances in the next four years where American boots will need to be on the ground somewhere that we don’t expect today, but it is going to have to meet a very high threshold for how does this impact the vital national interests of the United States, and who do we have with us,” said former U.S. Diplomat Karl Inderfurth, who  is at the Center for Strategic and International Studies.Analysts say the president’s foreign policy credentials could help him manage key relationships with his foreign counterparts, including China’s new president Xi Jinping and with Russian President Vladimir Putin. – VOA