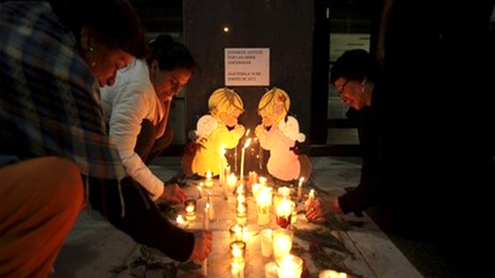 Guatemalan police are investigating the murder of two girls aged six and 12 whose bodies were found dumped on a street in the capital, Guatemala City.

The girls, who were wearing pyjamas, appeared to have been strangled, officials said.Police are trying to establish whether their deaths are linked to the murders of two women found with gunshot wounds in the same district.Some 700 women were killed in Guatemala in 2011, according to official figures.The bodies of the two girls were found in the early hours of Wednesday on a street in Zona 11, a southern district of Guatemala City.

Two murdered women, thought to be aged between 20 and 35, were discovered in the same neighbourhood. One had been shot in the face.It is not clear whether they were victims of domestic violence or murdered by criminal gangs.”Guatemala awoke in mourning,” women’s rights group Survivors’ Foundation said in a statement. “We demand these crimes be solved.”Two other women were killed overnight in the town of La Union, in eastern Zacapa province.

They were shot dead outside a school, the authorities said.Legislation against domestic violence was introduced in 2008, but campaign groups say very few are held to account for these crimes.President Otto Perez Molina, who took office a year ago, has launched a campaign to curb domestic violence.In his state-of-the-nation address on Monday, he hailed Guatemala’s “historic decline in violence” in 2012.Murders were down by some 10%, he said.

According to government figures, there were 5,174 violent deaths in Guatemala last year.In recent years, Guatemala has had one of the highest per capita murder rates in the world, according to the United Nations: 40 homicides per 100,000 inhabitants in 2010.The country has struggled to cope with an increase of violence generated by drug gangs operating throughout Central America, such as the Zetas from neighbouring Mexico.From 1960 to 1996, Guatemala was engulfed in civil war between left-wing guerrillas and the government. Rape was widely used as a weapon of war to intimidate opponents. – BBC