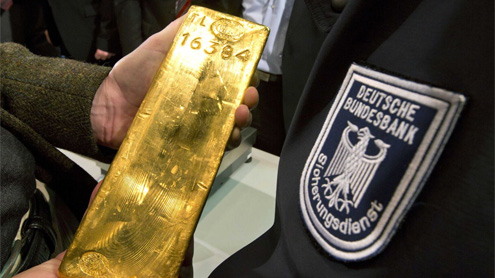 Germany: Germany’s central bank is hauling home tens of thousands of gold bars currently stored in the United States and France, in a high-security operation spread over eight years.

All 374 tons of German gold held in Paris vaults will be moved back to the Bundesbank’s vaults in Frankfurt by 2020, the bank said Wednesday. A further 300 tons of gold stored in New York will also be brought back.In total, the shipments are worth $36 billion at current market prices and represent about 19 percent of Germany’s gold reserves — the world’s second-largest after the United States’.Once the shipment is complete, Frankfurt will hold half of Germany’s 3,400 tons of reserve gold — currently worth about $183 billion — with New York retaining 37 percent and London storing 13 percent.

But don’t expect the Bundesbank to reveal how it’s going to keep the valuable cargo safe on its way back to Germany — especially after the stunning raid of a Berlin bank earlier this week in which burglars tunneled 30 meters (100 feet) to reach the safety deposit room.”For security reasons we can’t discuss that, partly to protect the gold, partly to protect the staff that will be carrying out the transfer,” said spokesman Moritz August Raasch.”But of course since we transport large sums of money around Germany every day, we’ve got a certain amount of experience with this.”

During the Cold War, Germany kept most of its gold abroad for fear it could fall into the hands of the Soviet Union if the country was invaded. Another reason was that it’s easier to swap the reserves for foreign currency in London, Paris and New York, where gold is traded.Since France, like Germany, switched to the euro more than a decade ago, storing gold in Paris was no longer necessary, the Bundesbank said.The move follows criticism last year from Germany’s independent Federal Auditors’ Office, which concluded that the central bank failed to properly oversee its gold. The auditor suggested the central bank should carry out regular inspections of the gold held abroad.

The auditors’ report stunned Germany, where the Bundesbank routinely tops polls of the nation’s most trusted institutions. The central bank was taken aback and maintained it didn’t see the need for more scrutiny in overseeing the reserves, saying “there is no doubt about the integrity of the foreign storage sites.”But several politicians jumped on the issue and called for some of the reserves to be repatriated.The Bundesbank isn’t taking any chances should anything happen to the gold on its way back to Frankfurt. – YahooNews