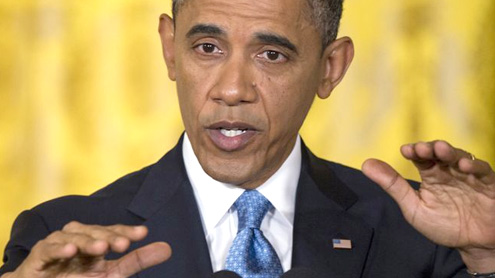 U.S. President Barack Obama is reviewing proposals to curb gun violence in the United States.  The move comes a month after a shooting rampage in Newtown, Connecticut that killed 20 children and six school personnel.

A major political battle is brewing in the United States over gun control.U.S. President Barack Obama is expected to propose legislation designed to reduce firearm violence – that kills an average of 34 Americans every day.“The belief that we have to have stronger background checks, that we can do a much better job in terms of keeping these magazine clips with high capacity out of the hands of folks who shouldn’t have them, an assault weapons ban that is meaningful,” he said.

Last month’s massacre in Newtown stunned the nation and led to renewed calls for tougher laws on gun ownership.Winnie Stachelberg is with the Center for American Progress. “You know the Newtown tragedy that sadly we are marking the one month anniversary of has changed the nature of the discussion around gun violence in this country.  There is no doubt about it.  There is a new paradigm,” she said. Vice President Biden has been leading a task force on preventing gun violence.

He has met with a number of groups interested in the gun-control debate, including gun rights advocates.President Obama says action is needed to protect the most vulnerable Americans. “If there is a step we can take that will save even one child from what happened in Newtown we should take that step,” he said. However, gun-control legislation is very controversial in the U.S., where the right to bear arms is enshrined in the Constitution.

Firearms sales have spiked as people rush to buy guns out of concern that stricter laws may be enacted.Gun owner Bruce Bumgarner said, “Gun control: all it is going to do is take the guns out of the people that obey the law.  It is not going to control the outlaws that take the guns to do crimes with them.”Any new gun control legislation is expected to face fierce opposition from the National Rifle Association and its four-million members.  – VOA