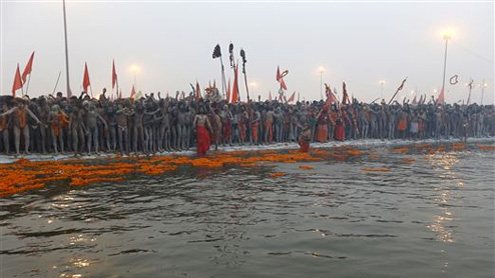 NEW DELHI: In India, millions of people have taken a dip at the confluence of two rivers in the northern city, Allahabad, at the start of a major Hindu festival held every 12 years.

The 55-day event is expected to attract a staggering 100 million pilgrims.As holy chants resounded, naked and scantily clad Hindu priests smeared with ash arrived in colorful processions to take a dip at one of Hinduism’s holiest spots — the confluence of the Ganges, Yamuna and the mythical Saraswati River in Allahabad. Some came in ornately decorated chariots. Others came brandishing tridents and sticks as the Kumbh Festival got underway on Monday.

They were followed by hundreds of thousands of Hindu devotees who thronged the river’s banks and took a ritual bath. The holy dip is believed to cleanse them of their sins. They came from all corners of the country and represented a microcosm of urban and rural India – rich and poor, men, women and children.  The manager of Kumbh Mela, Om Prakash Srivastava, says that by noon, about five million worshipers had braved the winter chill and taken a dip.

He says, despite thick fog at night, many people began bathing as early as 2:30 am to avoid the crowds in the day. He says ten million would have bathed by the end of the day.During the next 55 days, nearly 100 million people are expected to attend the festival, which has been billed as the biggest gathering in the world.The festival is believed to date back 2000 years. According to Hindu mythology, when gods and demons fought over a pitcher of nectar that gives immortality, some drops fell on four towns, including Allahabad. These towns host the festival in rotation. The one at Allahabad is believed to be the holiest and surpasses the others in its sheer scale and size.

Preparing for the mega event is no easy task. A virtual township has been erected to cater to the vast crowds. Temporary medical camps, roads, bridges and toilets have been built. About 30,000 policemen are posted to manage the huge influx and guard against stampedes or terror attacks. The cost to the administration: about $300 million.Ensuring that the water is safe and pure for devotees is also a challenge in a river which is among India’s most polluted.

Following concerns expressed by Hindu priests and others, Srivastava says the government has ordered industries that discharge untreated effluents into the river to shut down.He says the government has also flushed the river with extra water to ensure that it is clean and free flowing. Plastic bags have been banned.Although pilgrims will come and go over the coming weeks, the Hindu priests who often lead rival sects, pitch camp for more than a month. Some of them are keeping pace with the times. One of them is holding a two-day seminar to debate environmental imbalance and green issues related to the Ganges River. Another, Swami Avdheshanand Giri Ji, has a Facebook page. – voa