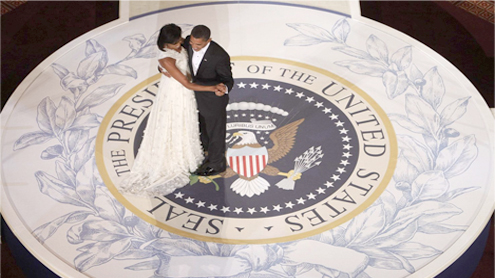 WASHINGTON: President Barack Obama’s second inauguration is shaping up as a high-energy celebration smaller than his first milestone swearing-in, yet still designed to mark his unprecedented role in American history with plenty of eye-catching glamour.

A long list of celebrity performers will give the once-every-four years right of democratic passage the air of a star-studded concert, from the bunting-draped Capitol’s west front of the Capitol, where Obama takes the oath Jan. 21, to the Washington Convention Center, which is expected to be packed with 40,000 ball-goers that evening.The first family will lead a parade of clanging bands, elaborate floats and marchers, including costumed dancers, prancing horses and military units, down Pennsylvania Avenue. The president will dance with the first lady, whose dress seems destined to be most anticipated fashion statement of the second Obama administration.

A new element of the inaugural events will be announced next week, with the appointment of around half a dozen “citizen co-chairs,” community leaders from across the country chosen because they represent the president’s accomplishments and commitments. They will take part in inaugural events throughout the weekend.Estimates of turnout are 600,000 to 800,000, compared with the 1.8 million in the record crowd on the National Mall four years ago to see the first swearing in of a black president. The mood of this 57th inauguration will be tempered by the weak economy, high unemployment, the aftermath of the Connecticut elementary school shooting and the long war in Afghanistan that’s expected to require U.S. combat forces through the end of next year.

Yet developments in the last week have shown that inaugural enthusiasm is high.A limited offering of $60 inaugural ball tickets for the general public sold out quickly, and inauguration planners have tried to crack down on scalping business that’s sprung up online. There’s an impressive list of celebrities, including Beyonce, Katy Perry and Usher, who have signed on to perform.While organizers said Obama was cutting back the number of balls from 10 last time to just two this year, The Associated Press has learned that they are expecting more than 35,000 to attend the larger of the two and 4,000 to attend a ball in honor of U.S. troops — double the size of four years ago.

Another factor that could increase turnout is the unseasonably warm weather in Washington. Early forecasts indicate that Obama will be taking the oath of office while the temperature is in the 40s, with hardly any chance of precipitation.Steve Kerrigan, president and CEO of the Presidential Inaugural Committee, said that just because the festivities are going to be smaller doesn’t mean they are going to be any less significant.”What we’ve been seeing from the very beginning is a passion and energy for this inaugural because people want to be a part of history,” Kerrigan said. “This is a moment that’s only happened 56 other times.”

Obama’s speech gives him a moment to command the world’s attention on a level that’s rare even for a president.If history is any guide, Obama will try to put behind the divisive election. He has the State of the Union three weeks later to make his points on taxes, guns, immigration and other issues. It’s a good bet this day will be a patriotic love letter to America.”Second inaugurals are often a kind of victory lap speech in a lot of ways, that would go back to Thomas Jefferson in 1805,” said presidential historian Leo Ribuffo of George Washington University. “Presidents are often reflecting on accomplishments of the administration and the challenges that will continue into the second term.”

The 2009 inauguration will be remembered as a milestone for a nation built on slavery and blood-stained by the civil rights movement. But Obama clearly has that historical context in mind for his second go-round, as evidenced by the Bibles he chose to place his left hand on while taking the oath of office — one owned by Abraham Lincoln and one by Martin Luther King Jr.Their selection is especially symbolic because Obama’s second inauguration comes on the federal holiday marking King’s birthday and in a milestone anniversary year involving both men. It was 150 years ago when Lincoln signed the Emancipation Proclamation to end slavery, and 50 years ago when King delivered his “I Had a Dream” speech from the steps of the Lincoln Memorial — a monument that will be straight ahead in Obama’s sight as he speaks to his country.

“We’ve got the Bible of the great emancipator on top of the Bible of the leader of the civil rights movement for an African- American president to take the oath of office,” Kerrigan said. “It’s an amazing moment that people want to touch and feel and be a part of.”The inauguration will transform Washington, where most federal offices would be closed for the King holiday, by shutting down streets downtown and bringing regular daily life in the city to a halt. Viewing stands are set up along Pennsylvania Avenue for the parade from the Capitol to the White House. Street lamps will be removed, then replaced at the day’s end.

It takes lots of people to pull it all off.There are 550 people working for the Presidential Inaugural Committee, 1,300 members of the military coming in support roles and countless security officials, including police from multiple agencies and Secret Service providing security. The cost is high: Tens of millions of dollars in donations typically are raised to pay for the parade and parties, more than $1 million is appropriated by Congress for the swearing-in ceremony and security costs are kept under wraps but also covered by taxpayers.

Sen. Chuck Schumer, D-N.Y., who oversees the ceremony on Capitol grounds, has committed to preventing the crowd problems that marred the 2009 celebration, when thousands of ticketholders got stuck for hours underground in what became known as “the purple tunnel of doom.” That 3rd Street tunnel is being closed, and Schumer says there will be better signs to direct attendees, and staff will monitor Twitter and other social media to detect and address any problems.Obama’s inaugural theme, “Our People. Our Future,” is meant to reflect the strength of Americans, their ability to overcome challenges and the country’s diversity. Diversity has been a focus in choosing participants throughout the festivities, with performers representing a range of demographics and parade participants from all 50 states.

The entertainment, too, reflects a variety of musical talents, with Beyonce, Kelly Clarkson and James Taylor performing patriotic standards at the swearing-in ceremony. Others such as Smokey Robinson, Alicia Keys, Brad Paisley, Marc Anthony, Stevie Wonder and the cast of “Glee,” are signed up for the other events, including a children’s concert next Saturday and the president’s two official balls.Obama plans to kick off the weekend’s festivities on that Saturday with the National Day of Service, a call for Americans to serve their communities in honor King’s legacy. Obama, a former community organizer in Chicago, started the volunteer program four years ago and inaugural organizers say he hopes future presidents will continue it.

The Presidential Inaugural Committee is setting up a fair on the National Mall to encourage service that day and beyond and has staff working in all 50 states to coordinate local programs. Obama, Vice President Joe Biden and their families plan to personally participate in projects in Washington.Also on Saturday, first Lady Michelle Obama and Biden’s wife, Jill, are set to host a concert for America’s children as they did four years ago. Popular young artists are putting on a show and tickets are being distributed to Washington schoolchildren, among others. The concert will pay special tribute to military families as part of the two women’s focus on supporting their service and sacrifice.

At noon on Sunday, Jan. 20, the time the Constitution requires the new term to begin, Obama plans to take his official oath in the White House’s Blue Room with some media coverage, while Biden plans an official swearing in at the Naval Observatory. The public ceremony is not being held until the next day because inaugurations historically have not been held on Sundays. – YahooNews