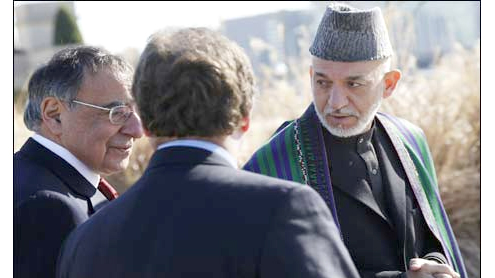 WASHINGTON: The United States sought to assure Afghan President Hamid Karzai on Thursday that it would remain committed to his country even as US officials weigh a major withdrawal of American forces.

After an elaborate military ceremony for Karzai outside the Pentagon, US Defense Secretary Leon Panetta told his “distinguished visitor” that more than 10 years of war had paved the way for Afghanistan to stand on its own.”After a long and difficult past, we finally are, I believe, at the last chapter of establishing a sovereign Afghanistan that can govern and secure itself for the future,” Panetta said.

“We’ve come a long way towards a shared goal of establishing a nation that you and we can be proud of, one that never again becomes a safe haven for terrorism,” he said at the outset of his talks with Karzai.Since US-led troops toppled the Taliban from power in 2001 following the September 11 attacks, the Afghan president has had a stormy relationship with his US allies, and American officials are anxious to demonstrate Washington’s full-fledged support during his visit.

In his talks this week, Karzai is expected to push for a substantial US military presence in Afghanistan after 2014, when the NATO-led mission is due to end.But some officials in the White House favor a light footprint of several thousand troops after 2014, and Ben Rhodes, a deputy national security adviser, even suggested Tuesday that the United States might pull out all of its troops.US military officers privately acknowledged that White House comments about possibly withdrawing all forces by the end of 2014 was primarily designed as a tactic in negotiations with Kabul. There are currently about 66,000 US boots on the ground, after a peak of about 100,000.

Seeking to reassure Karzai, Panetta said the United States had an unshakable “bond” with Afghanistan after fighting side-by-side on the battlefield.”I also want to assure you, my friend, that the United States and the Department of Defense are fully committed to helping the people of Afghanistan secure and govern their own country.”We have sacrificed together — that has created a bond that will not be broken in the future.”

For his part, Karzai thanked Panetta for the US military’s contributions and for the red-carpet ceremony, saying he was hopeful Washington and Kabul would work out an agreement allowing a future US military role beyond 2014.”I thank you and our other allies for providing Afghanistan the assistance that was needed for the past 10 years,” Karzai told Panetta as reporters looked on.”I am sure… that Afghanistan and the United States will work out a modality for a bilateral security agreement that will ensure the interests of Afghanistan and also the interests of the United States. – TheNews