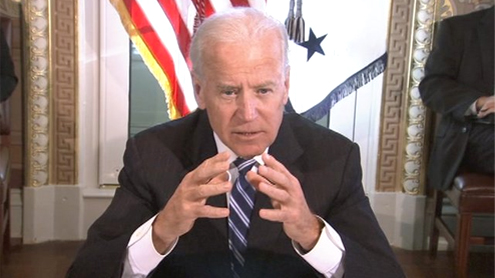 US Vice-President Joe Biden has said his task force on gun control will make its recommendations to President Barack Obama as early as Tuesday.

Mr Biden met members of the National Rifle Association (NRA) on day two of White House talks on gun control policy.The perennial US debate on gun violence has been revived by a massacre at a school that left 27 dead last month.Soon after Mr Biden spoke, reports of a school shooting in California emerged.One student was shot and wounded on Thursday morning at a high school in Taft, California, sheriff’s officials said. One other person was injured but refused medical attention.A suspect, thought to be another student, was in custody.Mr Biden said he would present his findings to President Barack Obama next week because they had only a “tight window” of time in which to act.
”
There is nothing that has pricked the consciousness of the American people,” Mr Biden said, “there is nothing that has gone to the heart of the matter more than the visual image people have of little six-year-old kids riddled – not shot with a stray bullet – riddled, riddled, with bullet holes in their classroom.”The vice-president said recommendations could include universal background checks for gun buyers and updating databases with information about convicted criminals.Mr Biden also said he had encountered widespread concerns over high-capacity ammunition magazines.

Following the meeting, the NRA criticised it as part of an agenda to weaken gun rights rather than an effort to keep children safe.”While claiming that no policy proposals would be ‘prejudged’, this task force spent most of its time on proposed restrictions on lawful firearms owners,” the group said in a statement.”It is unfortunate that this administration continues to insist on pushing failed solutions to our nation’s most pressing problems.”The group pledged to lobby Congress on its own “meaningful contributions”.

Later in the day Mr Biden is expected to meet sportsmen, wildlife interest groups and entertainment industry organisations.Meanwhile, Attorney General Eric Holder is due to meet a representative from Walmart, the biggest US gun seller, alongside other gun retailers.Walmart had initially declined to send anyone to the White House, but a spokesman told Reuters news agency the retailer had “underestimated the expectation to attend the meeting”.The White House has pledged to give its recommendations to Congress by the end of the month.But on Wednesday, Mr Biden suggested the president could take executive action, if needed.

Any attempts to impose new gun regulations would meet stiff opposition as many Americans cherish the constitution’s Second Amendment on the right to bear arms.But President Obama does have vocal support for change.On Wednesday, New York Governor Andrew Cuomo backed tighter restrictions on guns, saying: “No-one hunts with an assault rifle. No one needs 10 bullets to kill a deer. End the madness now.”

Former president Bill Clinton also said the availability of high-capacity ammunition magazines was “nuts”.In the wake of December’s shooting in Newtown, Connecticut, the NRA advocated having armed gunmen at every school in the country.Several pro-gun congressmen said December’s massacre had prompted them to reconsider their views. – BBC