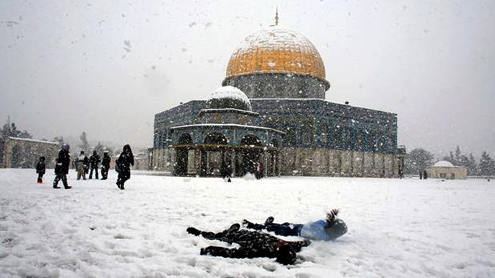 Jerusalem was transformed into a winter wonderland on Thursday after heavy overnight snowfall turned the Holy City and much of the region white, bringing hordes of excited children onto the streets.

As temperatures plummeted, the bitter winds and rain that have battered the Middle East since Sunday turned into snow, blanketing the Holy Land in white and closing schools and businesses, as much of the transport infrastructure ground to a halt.As dawn broke, at least 10 centimetres (four inches) of snow had settled in Jerusalem, which lies at an altitude of about 800 metres, giving its pine-covered hills the unusual aspect of a ski resort.

And with no letup in the snowfall, city officials cancelled all bus routes but said the light rail would remain operational and free of charge until 1200 GMT in a bid to encourage people to avoid using their private vehicles.Across the city, schools were closed for the day, with thousands of gleeful children — and no shortage of adults — taking to the streets to pelt each other with snowballs or to build snowmen.“Look at our snowman!” Manar Barhoum shouted in the east Jerusalem neighbourhood of Beit Safafa, pointing proudly at a four foot effort, complete with a carrot nose and eyes made of cucumber slices.

“It’s a salad snowman,” her mother Miriam laughed, as she tried to use cherry tomatoes to form a mouth, before giving up and using a curved branch instead.With snow a rarity in the normally temperate Middle East, many resorted to using trays or bin bags to slide down some of its many steep hills, although some people could also be seen dragging sledges through the streets.A handful of visitors also turned up from Tel Aviv, where snow is almost unheard of, to join in the winter fun, somehow reaching Jerusalem despite the closure of the main highway connecting the two cities.

Few pedestrians took to the streets and those who were forced to brave the cold for reasons other than fun walked gingerly to avoid falling on the treacherously slippery pavements.Snow ploughs were out clearing the main roads which had also been gritted, but very few vehicles could be seen on the streets following pleas by the city council for the public not to use their cars.With less than two weeks until Israelis vote in a January 22 general election, campaign plans were put on hold for the day, and many electoral posters were almost obliterated by snow, AFP correspondents said.

The winding streets of Jerusalem’s Old City were almost completely deserted, with only a handful of shops open for business.Forecasters said the snow would continue to fall until Thursday afternoon, but in most of Jerusalem, the sun was out by midday and the snow was starting to melt.There was similar excitement and joy in the West Bank, with children and even policeman making the most of the rare thrill of snow in the city of Ramallah.

Dawla Suleiman, 23, was with a group of women, giggling as they tossed snowballs at each other.“It’s a beautiful day, we feel far away from work and it’s a time to play and enjoy the snow,” she said beaming.In the northern West Bank village of Qusra, 48-year-old Abdelhamid Qusrawi was also marvelling at the snow, which he said was the most he’d seen in a decade.“In 1991 we had more snow, but in the past 10 years, this is the most that we’ve seen,” he said.“I like the snow, but it is cold for me, I went outside and played with my small nephews and they were all against me, throwing snow balls at me, so I had escape inside!” – Kahleejnews