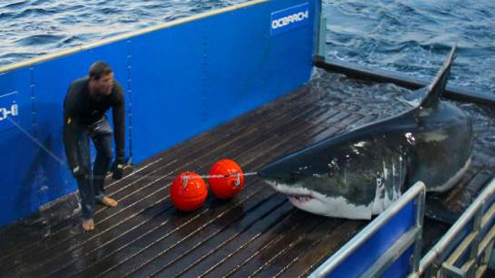 Police are warning swimmers to be on their guard after a great white shark was spotted just 200 yards of the Florida coast.

The shark, which goes by the name Mary Lee, is 16 feet long and weighs 3,456 pounds. Together with another great white, called Genie, both sharks have been fitted with electronic tags to keep track of them.However the tags haven’t been fitted by local police concerned about swimmers safety, instead a nonprofit organization is tracking the sharks for altogether different reasons.Last September, researchers from Ocearch, which studies oceans and fish, embarked on a project to tag two sharks off the coast of Cape Cod, Massachusetts.

The purpose of the project is to learn more about how the sharks live and their breeding habits in order to better protect them. This week, three months after their tagging, much to the surprise of the scientists both Mary Lee and Genie were spotted swimming off the coast of Nassau County.‘It’s really odd to me that we only tagged two sharks in Cape Cod,’ Ocearch’s chairman Chris Fischer told Fox 35. ‘And both of those sharks are off Jacksonville. That’s 100 percent of our sample size.’With 73 million sharks killed every year for human consumption, Fisher is hoping the project will help create awareness about these giant creatures.

Scientists have long suspected that sharks swam south for the winter and researchers are predicting that both will stay in the warm Florida waters for the winter.Police are urging swimmers and surfers to remain vigilant and not to get too close. There is even an online tool on the Ocearch website that enables people to keep tracks of the whale’s movements.  – DailyMail