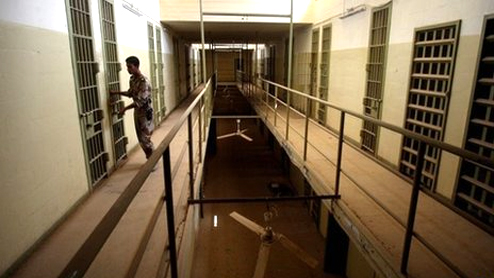 A defence contractor whose subsidiary was accused of conspiring to torture Abu Ghraib prisoners has settled with former inmates for $5m (£3m).

US firm Engility Holdings paid 71 people held at Abu Ghraib, Baghdad, and other US-run prisons, on behalf of L-3 Services, according to a legal filing found by the Associated Press.L-3 provided translators to the US military in post-war Iraq.Images of abuse at Abu Ghraib in 2004 sparked international outage.Another contractor which provided interrogators to the US military, CACI, is expected to go to trial over similar allegations.The US government is immune from lawsuits stemming from combat actions by the military in time of war, but courts are still establishing whether independent firms operating in war zones should have the same legal immunity.

The Engility settlement marks the first successful effort by lawyers for former Iraqi prisoners against defence contractors in lawsuits alleging torture.A lawyer for the ex-detainees, Baher Azmy told the BBC’s Newsday programme that each of the 71 Iraqis received a portion of the settlement for suffering “a vast and grim arsenal of torture and abuse”.He did not say how the money was distributed, and said there was an agreement to keep details of the settlement confidential.

Mr Azmy, legal director at the Center for Constitutional Rights., said that although some soldiers were court-martialled for their role in abuses at Abu Ghraib, the US Army had not sought to prosecute private contractors.”This litigation attempts to close that gap in accountability and hold corporations – who, by the way, made millions and millions of dollars from US government work in Iraq – accountable, and give back some of those extravagant profits to individuals they harmed,” said Mr Azmy.Engility Holdings said it did not comment on legal matters.

Abu Ghraib came to world attention after the release in 2004 of photographs showing the physical, sexual and psychological abuse of Iraqi prisoners by US guards.The images showed prisoners facing dogs, being stripped naked and wired up as if being subjected to electric shocks and became a turning point of the Iraq war.Eleven soldiers were convicted of breaking military laws, but many received sentences of a just a few years. The last remaining soldier in prison convicted in the case was released in August 2011. – BBC