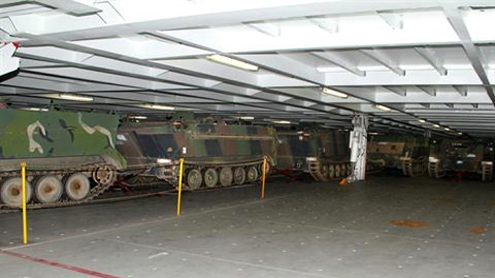 BEIRUT: The United States has given 200 armoured vehicles to Lebanon, the Lebanese army said on Monday, bolstering forces that have been struggling to deal with sectarian violence inflamed by the war across the border in Syria.

The M113 armoured personnel carriers (APCs) arrived by ship to Beirut on Sunday, the army said in a statement. A Lebanese security source said the army now had 1,200 APCs.A U.S. diplomat said the shipment of vehicles would support the Lebanese armed forces’ “capabilities and their mobility and ability to respond to crises. It is also to protect borders and internal stability”.The diplomat, who preferred not to be named, said the vehicles were used but were all in “very good working order and will be refurbished here in Lebanon”.

The United States has provided more than $140 million in equipment and assistance to the Lebanese armed forces in the past six months, including six Huey 2 helicopters, a 42-metre coastal security craft, more than 1,000 guns – including grenade launchers — and 38 million rounds of ammunition.Lebanon, still rebuilding after its 15-year civil war, has seen clashes between gunmen loyal to opposing sides in neighbouring Syria’s conflict, mostly in the northern port town of Tripoli, but also in the capital Beirut and the southern coastal city of Sidon.

Syrian forces have occasionally breached the Lebanese border to battle with rebels who are fighting to oust Syrian President Bashar al-Assad and take refuge in Lebanese border towns. Syrian mortar bombs have also targeted Lebanese villages.Few expect a fight between Lebanon and its much larger neighbour Syria, a country whose troops were garrisoned in Lebanon until 2005 and still has influence over the security services. – KhaleejNews