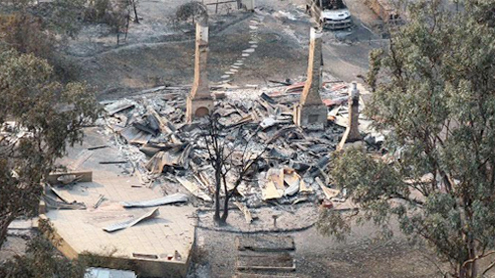 Police were combing devastated towns for 100 people missing, after wildfires tore through the Australian island state of Tasmania, with fears a number of them may have perished.

Acting Tasmania police commissioner Scott Tilyard said about 100 people were yet to be accounted for after fast-moving fires ravaged the south of the state, where residents described trees exploding and towering flames.“That’s not to say that those people necessarily have come to any harm, but obviously we can’t totally eliminate that until we’ve had confirmed contact with those individuals,” Tilyard told reporters.“But we have to brace ourselves for the fact we may locate one or more deceased people.”

Police and troops were going door to door in the worst-hit town of Dunalley, where about 70 homes were destroyed and the main street razed, with the local school reduced to ash in conditions described as catastrophic.Tilyard said there had been no bodies discovered in the homes searched so far and “we hope certainly that that continues.”“We also have to brace ourselves for the fact that we may locate one or more deceased people before we end the process.”

He had earlier expressed grave fears for the welfare of a “handful” of the 100 missing, which include locals and tourists.Prime Minister Julia Gillard will on Monday tour Dunalley, where resident Tony Young told ABC radio he saw trees exploding “like firecrackers”, with flames reaching 20 to 30 feet (6-9 metres) high.The government has also warned of further danger across the nation from extreme heat predicted in several states this week.

Britain’s Queen Elizabeth II, Australia’s head of state, sent her condolences to Tasmania, expressing “deep concern” at the destruction and offering her sympathy to those who had lost homes and livelihoods.“I offer my support and admiration for the firefighters, volunteers and emergency services officers who have been working tirelessly to contain the situation,” the monarch said in a written message published by the Australian Associated Press.

Almost 3,000 people were evacuated from their homes and many were stranded Sunday in emergency shelters as the fires raged to the east and west of the state capital Hobart, cutting off roads.One fire in Forcett, to the east of Hobart, scorched 15,000 hectares (37,000 acres) of land, according to Australia’s AAP news agency.Residents returning to the wreckage of their homes described the devastation as “armageddon”, while others recounted desperate moments as the fire tore through, forcing them to take shelter in the Dunalley canal.

One family was saved by a water-bombing aircraft which arrived overhead as flames surrounded their waterfront caravan. They were armed only with buckets.The Tasmania Fire Service (TFS) downgraded two major blazes from emergency to watch-and-act status, with calmer conditions bringing a much-needed reprieve for crews ahead of worsening fire weather expected later in the week.TFS chief Mike Brown estimated that there were “hundreds of kilometres of uncontrolled fire” still burning in heavily forested areas that are difficult to access.

“We have got a lot of work ahead,” said Brown.“We are going to be in this situation for a number of days yet.”High winds which fanned the worst of the blazes had dropped off, giving crews a valuable opportunity to contain some 20 fires still active before conditions were expected to worsen again, said TFS spokesman John Holloway.“(Crews will be) doing some more active firefighting rather than just property protection,” Holloway told ABC Radio.

“We’re looking at some warmer weather again on Thursday, so if we’ve got this window to work on these fires and get some form of control around them, we’re going to take that opportunity when we can.”Hot and dry summer conditions have seen fires start in a number of Australian states this month, with heatwaves in several major cities.Wildfires are a fact of life in arid Australia, where 173 people perished in the 2009 Black Saturday firestorm, the nation’s worst natural disaster of modern times. – KahleejNews