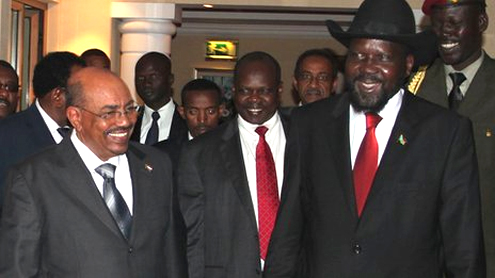 The leaders of Sudan and South Sudan are to meet to address disputes that brought them close to war following the South’s independence in 2011.

President Omar al Bashir of Sudan and Salva Kiir of South Sudan are set to discuss speeding up the implementation of a deal reached last September.The talks in the Ethiopian capital Addis Ababa follow reports of renewed clashes on the disputed border.Tensions over oil and security brought them to the brink of war last April.Western governments have urged both sides immediately to withdraw their forces from what is intended to be a demilitarised border zone.

In September, the two men agreed to set up a demilitarised buffer zone, but some parts of the deal – such as resolving an ongoing dispute over oil – have yet to be implemented.One of the most critical issues has been the halt in oil production in the land-locked South due to a disagreement over pipeline fees, says BBC world affairs correspondent Peter Biles.
he oil is exported northwards to Sudan where it can be refined. But since the shutdown of operations, neither country has been able to reap any economic benefit from the oil.

Another point of contention is the flashpoint region of Abyei, which is claimed by both sides. It lies on their border and is inhabited both by nomadic herdsmen who are loyal to Sudan and other groups who are closely linked to the South.South Sudan, where people chiefly follow the Christian faith or traditional indigenous religions, gained independence in 2011 after more than two decades of civil war with the mainly Muslim north.

The latest accusation by South Sudan that the authorities in Khartoum have launched fresh ground and air attacks in the western state of Bahr el-Ghazal will do little to calm the atmosphere as the two presidents prepare to meet, adds our correspondent. – BBC