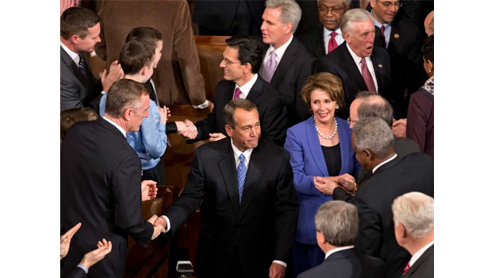 WASHINGTON: If the new US Congress that convened on Thursday turns out to be less confrontational, more willing to reach reasoned, bipartisan compromise, less … well … on steroids, there could be a reason.

A record number of women were sworn in as members of the 113th Congress as a result of elections last Nov. 6.The 80 women members of the House of Representatives are joining a total of 20 female senators – a record crop for both chambers, which have been dominated by men – white men – from the time the first US Congress was seated in 1789.

The 100 women of the 113th US Congress – out of 535 members – will be thrown into a pressure cooker with huge fights already brewing over reducing federal budget deficits, imposing new controls on gun ownership and reforming badly outdated immigration laws and the tax code.Last month, in the midst of a bitter budget and tax battle known as the “fiscal cliff,” two female senators told ABC News that if women were in charge, things would have been fixed much more easily.

“I think if we (women) were in charge of the Senate and of the administration, we would have a budget deal by now,” said Republican Senator Susan Collins of Maine. “With all deference to our male colleagues, women’s styles tend to be more collaborative,” she said.Democratic Senator Claire McCaskill agreed. “By nature we are less confrontational and more collaborative,” the Missouri lawmaker said. “Not only do we want to work in a bipartisan way, we do it.”

This record number of women in the new Congress will get a chance to have their impact. But for the most part, the men will still be in control. Almost all of the top leadership positions in the House and Senate are held by men, as are most committee heads.The most famous female member of Congress is Nancy Pelosi, the only woman to ever hold the job of House Speaker. The California Democrat served in that top job from 2007-2010 before losing it in a Republican takeover of the House in 2011.

Interestingly, she is often described as having ruled the House with an iron-fist.Pelosi is being joined by some women with colorful backgrounds.One of the new members of the House is Tammy Duckworth of Illinois, an ex-Obama administration official and the first member of the US Congress born in Thailand. But she is better known as an Iraq war hero, having lost both of her legs and suffering other wounds.

Another Tammy made history as well on Thursday as Tammy Baldwin, a Wisconsin Democrat, became the first openly gay member of the US Senate and the first female senator from her home state.For the record: Women serving in Congress are much more likely to be Democrats than Republicans.