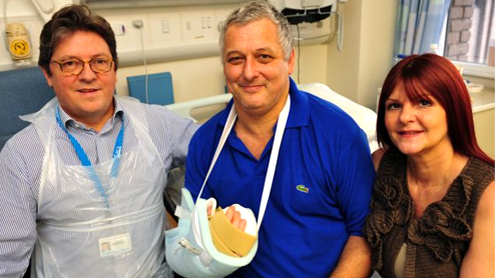 Eight days ago Mark Cahill was living with a paralysed right hand.Yesterday he was able to move his fingers for the first time in five years after becoming the first Briton to receive a hand transplant.

The operation also made history as the world’s first when the original hand was removed during the same procedure. In the past, recipients have already lost the hand before the replacement could be found.Mr Cahill, a 51-year-old grandfather from West Yorkshire, was deprived of the use of the hand when it became infected during a severe attack of gout.

He said he was ecstatic about the operation’s success so far, and hoped to be able to return to work as a pub landlord.‘This has changed my life,’ he added. ‘It feels great to look at this hand and see it move. Before the operation, I couldn’t tie my own shoes, do up the buttons on my shirt, cut up my own dinner or play with my grandson’s toys with him – hopefully I’ll be able to do all these things now.’

The eight-hour operation was carried out at Leeds General Infirmary by a team led by consultant plastic surgeon Simon Kay.Mr Cahill, with 47-year-old wife Sylvia by his side, said: ‘I’d like to thank the whole team at the LGI but above all, I would like to thank the donor family. It was a really great thing that they did.’Professor Kay predicted a year ago that 2012 would see Britain’s first hand transplant – and it happened on December 27 with just four days to go.

He said: ‘This operation is the culmination of a great deal of planning and preparation over the last two years. The team was on two years. The team was on standby from the end of November awaiting a suitable donor limb, and the call came just after Christmas.Professor Kay has been preparing to carry out a hand transplant for at least ten years, and recently set up a dedicated NHS unit for the procedure.Although the surgery is similar to re-attaching a hand or arm after it has been severed in an accident, using one from a donor is fraught with problems, he says.

There is the issue of rejection, requiring the recipient to take immunosuppressive drugs for life to prevent the donor organ being rejected.And the emotional and psychological needs of the recipient need careful and lengthy preparation.In 1998, New Zealander Clint Hallam received a pioneering hand transplant from a motorcyclist killed in an accident. Two years later he asked for it to be removed, saying it felt like a ‘dead man’s hand’.Professor Kay said a year ago that he hoped the team would not make the mistake of picking the ‘wrong patient’ to receive Britain’s first hand transplant.

He said: ‘We would be very keen not to scupper the UK programme by having another Clint Hallam.’Mr Cahill was told three months ago that he would be in line for an operation and he got the call on Boxing Day that a donor hand had become available.The surgery was carried out the following day. After the non-functioning hand was removed, the bone in his arm was attached to the new hand’s bones with titanium plates, before connecting a dozen tendons, eight blood vessels and three large nerves together.Professor Kay said: ‘When looking for a candidate, we have to make sure that the person was of the right age – there hasn’t been a child hand transplant yet – someone who could understand and co-operate with the process.

‘We were looking for someone who was medically suitable and someone who was prepared to take immunosuppressants.’It is estimated the operation cost the NHS around £10,000, not much more than the average kidney transplant. Donors have to be those who are brain dead but whose hearts are still beating.This is likely to mean they have suffered traumatic injury, such as a road crash, or a fatal stroke at an early age.Professor Kay said: ‘I felt very anxious but I’m incredibly proud of the team – everyone from the surgical team to the psychologists who supported Mark.

‘We couldn’t have done this without a hospital with the expertise the LGI has. And of course we should thank the donor – you can’t imagine anything more tragic than a family member dying unexpectedly at Christmas.’After celebrating Christmas with his family, Mark Cahill was all set for a holiday with his wife in Goa.But shortly after 8pm on Boxing Day he received the phone call telling him he was to undergo a hand transplant.

By 1pm the next day he was preparing for the eight-hour landmark surgery at Leeds General Infirmary.Mr Cahill had been unable to use his right hand for five years after it became infected owing to severe gout, an acute form of arthritis caused by a build-up of uric acid in the blood.He and his second wife Sylvia, who celebrated their 20th wedding anniversary last year, were forced to give up their beloved village pub, the Shears Inn in Greetland, near Halifax, because of his disability.

Mr Cahill, a former rugby league player, was also left wheelchair-bound at one point when the gout affected his spine.He said: ‘Anything I have now is better than what I had before this operation. I’m hoping to eventually get back to work – I’m already moving my fingers and the doctors say I’m making quicker progress than they expected.’Photographs posted by Mr Cahill on his Facebook page show his swollen hand before the operation and a painful infection on one of his fingers.

Mr Cahill said he was shocked when he was offered the ground-breaking surgery less than three months after he was added to the transplant register. ‘After a lot of tests, Professor Kay (the plastic surgeon who performed the operation) told me I could be a candidate for a hand transplant, and asked me to give it some thought.‘I discussed it with my family and came back to Professor Kay in about October and told him I wanted to go ahead with it – so when I got the call on Boxing Day to say there was a donor I was gobsmacked.

‘I really expected quite a wait, and it was a bit of a gulp moment. Sylvia and I were meant to be going on holiday to Goa this week, but this is obviously a much better turn-out.’When doctors learned that a hand suitable for transplant had become available they called in Mr Cahill for tests to check how his tissue matched with that of the donor.He said: ‘I was called into the hospital along with another recipient, and they tested us to see which was the stronger match – and I was.’

Within hours the doctors began the gruelling surgery, which saw his hand removed and the replacement attached in the same operation.Mr Cahill added: ‘It didn’t feel real until I woke up after the operation. It felt like a dream, even when I was going into theatre.’He added: ‘It’s how I expected it to look, because I’ve done a lot of research about hand transplants.

But you can do all the research you want and you don’t know how you’re going to feel – I’ve had a lot of help from psychologists because the biggest thing is afterwards, whether I would accept it as mine.’Mr Cahill, who has one daughter, Danielle, is full of gratitude to the family of the donor.His wife added: ‘It was a wonderful thing to do. It must have been really difficult for them but I’ll always be grateful for the choice they made.’ – DailyMail