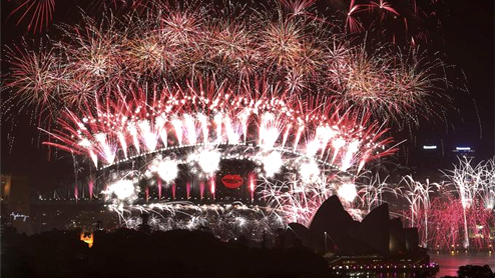 What news events will dominate 2013? Here are ten predictions. I have chosen some deadly serious issues of war and peace and politics, but thrown in some not-so-important sporting outcomes as well.

And please, please remember these predictions do not necessarily reflect my personal preferences. I am simply trying to guess what the next 12 months have in store – at the risk, no doubt, of looking very foolish in 12 months time.

1. We will see a bolder President Obama in this, his second term. On domestic issues like taxation, immigration and gun control, expect him to put up a stiffer fight against the Republican-controlled House of Representatives. But of greater concern to non-Americans is whether President Obama carries this resolve over into the international arena. For example, will he put time and effort into reviving moribund peace talks betweens the Israelis and Palestinians?

Even if we assume that Secretary of State John Kerry will want to make his mark, I’m not holding my breath. And will President Obama want to make a meaningful contribution to efforts to control carbon emissions? The 2008 candidate spoke passionately of the dangers of global warming. Now he has a chance to leave a legacy with a significance way beyond the United State’s borders.

2. Many experts believed that President Bashar al-Assad of Syria would not survive 2012. They were wrong. But the regime is slowly weakening and now, there seems a good chance that he will no longer be in power by the end of 2013. The end could come in one of three ways: 1) he boards a plane out of the country, perhaps to Russia 2) he flees to an Alawite stronghold within Syria 3) or he refuses to leave Damascus, and is killed.

And what happens next? The fear of many is that a new civil war breaks out as soon as the Assad regime is toppled, and that this is fought along sectarian lines. It’s very hard to be optimistic about Syria’s immediate future. Sadly, 2013 looks like it will be a year of suffering and bloodshed, amidst a worsening humanitarian crisis.

3. Binyamin Netanyahu will emerge as the winner of Israel’s January general elections.  He’ll continue to talk of the necessity of military strikes against Iran’s nuclear installations, and the Americans will continue to keep him in check.

4. Angela Merkel will win the German elections in September, and will remain the dominant political personality within the troubled Eurozone.

5. Silivio Berlusconi is a political survivor, but he will not win February’s elections in Italy. In Greece, meanwhile, a shaky coalition will struggle on to the end of the year, but not without wobbles and scandals. And life for ordinary Greeks will get harder and harder.

6. The Kenyan elections, in March, will be a crucial moment for Africa. If they are peaceful and well-run, they will provide a further boost to those who say “Africa is rising”. But a repetition of the violence that marred the 2007 elections would highlight how poor standards of governance are, even in the many African countries where economies are growing and a middle-class is beginning to flourish. Talking of which, in Nigeria, Boko Haram’s brutal campaign will rumble on in the north, even as parts of the south see increasing prosperity.

7. The 2013 Nobel Peace Prize will be won by… the African Union, in recognition of the efforts of its Peacekeeping Force in Somalia, Amisom, over several years.

8. Pep Guardiola, the man every oligarch dreams of installing as the next manager of their football club, will finish his sabbatical in New York and return to Europe and the English Premier League. But will it be Manchester United, Manchester City, Chelsea or Arsenal?

9. Having already retired from one day cricket, Sachin Tendulkar will also announce the end of his Test career. Meanwhile, England and Australia will play out a thrilling Ashes series, dominated by the two best batsmen in the world, Michael Clarke, and Alastair Cook. England will win, narrowly.

10. And, finally, this year Andy Murray will win Wimbledon. (I know, I wrote that last year, but I’ve got to be right eventually). – Aljazeera