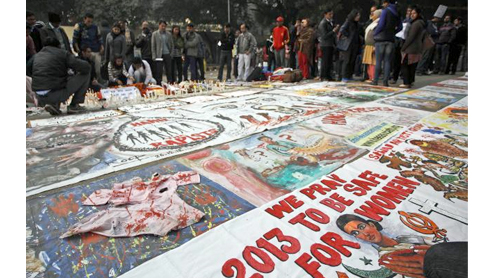 India’s top court said on Wednesday that it will decide whether to suspend lawmakers facing sexual assault charges.

Thousands of women gathered at the memorial to independence leader Mohandas K. Gandhi to demand stronger protection for their safety.The march came as police prepared to formally charge six suspects in the gang-rape and killing of a student in the capital two weeks ago.The Dec. 16 rape triggered outrage across the country and sparked demands for stronger laws, tougher police action against those accused of sexual assault and a sustained campaign to change society’s views on women.

As part of that campaign, Chief Justice Altamas Kabir agreed to hear a petition on Thursday from retired government administrator Promilla Shanker asking the Supreme Court to suspend all lawmakers from the national and state legislatures who are facing prosecution for crimes against women.She also asked the court to force the national government to fast-track thousands of rape cases that have languished in India’s notoriously sluggish court system for years.

“We need to decriminalize politics and surely a serious effort has to be made to stop people who have serious charges of sexual assault against them from contesting elections,” said Zoya Hasan, a political analyst.On Wednesday morning, several thousand women held a silent march to Gandhi’s memorial in the capital in memory of the victim, holding placards demanding “Respect” and “Justice.” Delhi Chief Minister Sheila Dikshit joined the women for a prayer session for the victim. The Gandhi memorial is a common protest site.

On Tuesday, the government set up a task force to monitor women’s safety in New Delhi and to review whether police were properly protecting women. The government had set up two earlier bodies to look into the handling of the rape case and to suggest changes in the nation’s rape laws.The rape of the 23-year-old university student on a bus has horrified many in the country and brought unprecedented attention to the daily suffering of women here, who face everything from catcalls and groping to rapes.

Six men arrested in the case were to be formally charged Thursday with kidnapping, rape and murder, said Rajan Bhagat, the New Delhi police spokesman. Police have said they would push for the death penalty in the case.Police were awaiting findings on a bone test conducted on one of the suspects to confirm whether he is a juvenile or an adult, which could affect the charges against him.Media reports say 30 witnesses have been gathered, and the charges have been detailed in a document running more than 1,000 pages. Police also have detained the owner of the bus used in the crime on accusation he used false documents to obtain permits to run the private bus service.

The family of the victim — who died Saturday at a hospital in Singapore — is struggling to come to grips with the tragedy.“She was a very, very, very cheerful little girl and she was peace loving and she was never embroiled in any controversies like this. I don’t know why this happened to her,” her uncle, Suresh Singh, told The Associated Press on Wednesday.The family of the victim, whose name was not revealed, called for stronger rape laws to prevent such attacks from happening again and demanded swift — and harsh — justice for woman’s assailants, Singh said.“If the government can’t punish them, give the rapists to the people. The people will settle the scores with them,” he said.