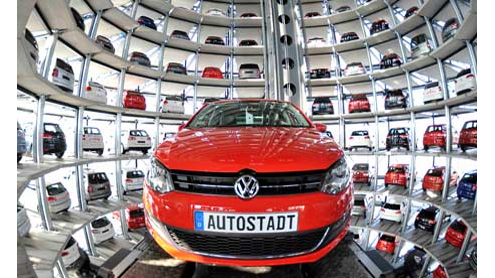 PARIS: Car sales in France, Spain and Italy in 2012 fell to the lowest levels in years, with December registration data underscoring the challenges facing the broader European economy.

Automakers are facing a sustained slump in the European car market as the euro zone debt crisis and government austerity measures sap consumer demand.”The new car market continues to decline – a trait which we anticipate will continue through the course of 2013,” Credit Suisse analyst David Arnold said on Wednesday, adding European auto sales were unlikely to see growth in 2013.

Europe’s stagnating auto market will have knock-on effects for other economic players including steel producers, Nomura analyst Matthew Kates said in a note, citing forecasts by consulting firm AutoAnalysis.Italy’s car sales, down 22.5 percent in December, slumped 19.9 percent for the full year to 1.4 million units, their lowest levels since 1979.”The car market is suffering from an overdose of taxes aimed at hitting, if not criminalizing, the acquisition, ownership and use of autos,” said Filippo Pavan Bernacchi, the president of Italy’s car dealers’ trade group Federauto.

He said he expected Italian car sales in 2013 to be close to 1.33 million units.French car registrations fell 15 percent in December, leaving the full year down 14 percent to 1.90 million vehicles – the lowest since 1997, French industry group CCFA said.Spain’s monthly sales shrank 23 percent, after a 20 percent fall in November. Its full-year total of 699,589 cars, down 13 percent, was the lowest since industry association Anfac began keeping records in 1989.

In a note on Italian data, auto think-tank Promotor said Italy’s full-year fall in car sales was particularly worrying at a time when the global auto market was growing.”The auto crisis does in fact involve only the euro area and is a direct consequence of the depressive effect of austerity policies on the real economy,” it said.The chance of a recovery in the euro zone economy has faded further into 2013 after the recession deepened in the final months of last year, a Reuters poll found last month.

Italy was seen recording a 0.2 percent economic contraction this year, according to government figures. The International Monetary Fund predicted a 0.7 percent decline.With fast-growing markets such as China and Russia increasingly meeting their own demand for steel, European producers are more than ever at the mercy of domestic industry.”It is difficult to get bullish on the outlook for European auto demand in the near term, with obvious implications for European steel demand,” Kates at Nomura said.

German auto demand, which had long resisted the slump spreading north, turned negative in the second half to post a 1.7 percent drop for January through November.In another sign of contagion, French delivery van sales contracted sharply in December, plunging 22 percent for their biggest monthly decline since the crisis of 2008, CCFA spokesman Francois Roudier said.”We have already been seeing individual consumers holding back (on car purchases), particularly in the mass market,” Roudier said. “Now company fleet sales are slowing down as well.” – Yahoonews