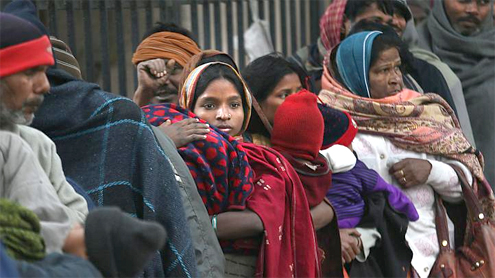 NEW DELHI: India will send billions of dollars in social welfare money directly to its poor under a new program inaugurated yesterday, aiming to cut out the middlemen blamed for the massive fraud that plagues the system.

Previously officials only handed out cash to the poor after taking a cut — if they didn’t keep all of it for themselves — and were known to enroll fake recipients or register unqualified people. The new program would see welfare money directly deposited into recipients’ bank accounts and require them to prove their identity with biometric data, such as fingerprints or retina scans.

Finance Minister P. Chidambaram has described the venture as “nothing less than magical,” but critics accuse the government of hastily pushing through a complex program in a country where millions don’t have access to electricity or paved roads, let alone neighborhood banks. The program is loosely based on Brazil’s widely praised Bolsa Familia program, which has helped lift more than 19 million people out of poverty since 2003. It will begin in 20 of the country’s 640 districts Tuesday, affecting more than 200,000 recipients, and will be progressively rolled out in other areas in the coming months, Chidambaram said Monday. The country has 440 million people living below the poverty line.

“In a huge new experiment like this you should expect some glitches. There may be a problem here and there, but these will be overcome by our people,” Chidambaram said.He appealed for patience with the program, which he called “a game changer for governance.”The opposition Bharatiya Janata Party has accused the ruling Congress party of using the program to gain political mileage ahead of elections expected in 2014.As a first step, the government has said it plans to begin directly transferring money it would spend on programs such as scholarships and pensions.

Eventually the transfers are expected to help fix much of the rest of India’s welfare spending, though Chidambaram said the government’s massive food, kerosene and fertilizer distribution networks — which are blamed for much of the corruption and lost money — would be exempt.The program will eliminate middlemen and transfer cash directly into bank accounts using data from Aadhar, a government project working to give every Indian identification numbers linked to fingerprints and retina scans. Currently hundreds of millions of Indians have no identity documents.

On Monday, 208 activists and scholars published an open letter expressing concern that the government was forcing the poor to enroll in Aadhar to get welfare benefits without putting safeguards in place to protect their privacy. They also expressed fears the government planned to eventually replace the food distribution system for the poor, the largest program of its kind in the world.“Essential services are not a suitable field of experimentation for a highly centralized and uncertain technology,” they wrote. Others said the government was trying to do too much too soon.

“A very important concern is are we ready for this sort of thing? The banking infrastructure is very poor, people are far from these banks, when they exist they are overcrowded. Sometimes people have to walk for a day to get to the bank,” says Reetika Khera, a development economist with the New Delhi-based Institute for Economic Growth.Mihir Shah, a member of India’s Planning Commission accepts that the government’s timeline is “unrealistic,” but said many critics had confused the lack of readiness with flaws in the plan itself.

“My question to them is is it better than what is there today? That is the only way we can judge policy. I don’t think there’s a perfect solution to any of mankind’s problems,” he said.Shah said a lot more work needed to be done before cash transfers could become a reality across the country. The identification drive needed to reach the vast majority of India’s poor, and villages needed banking infrastructure and Internet connectivity.“It is going to take time and it will happen only when it happens whatever the deadline. It will be rolled out only when these conditions are in place,” he said. But if the deadline “pushes us to fix the lacunae that currently hamper the roll out of cash transfer, then we’re in the right direction.” – ArabNews