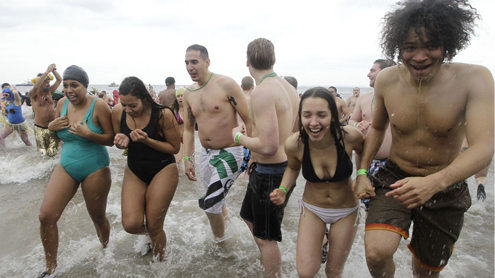 NEW YORK: Hundreds of hardy swimmers rang in 2013 with a plunge into the icy sea off Brooklyn’s Coney Island, an area struggling to recover from Superstorm Sandy.

Members of the Ice Breakers and the Coney Island Polar Bear clubs and other brave bathers stripped down to their trunks or dressed in costumes for the annual New Year’s Day splash.Some people hit the surf dressed only in bikinis or briefs. One woman dressed as a mermaid. Another swimmer wore a hat with horns.

Temperatures outside were in the 30s, and people screamed at the shock of the cold water.This year, Polar Bear club members and others were raising money for Sandy relief efforts. The area was badly flooded by the late October storm.The Ice Breakers try to raise awareness of water pollution. – Yahoonews