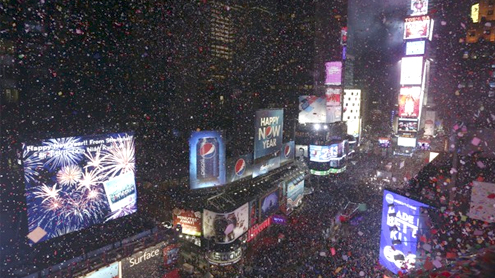 NEW YORK: As the world rang in 2013 with spectacular fireworks displays and showers of confetti, the spectre of economic uncertainty and searing violence dimmed some festivities and weighed on the minds of revelers hoping for a better year.

“With all the sadness in the country, we’re looking for some good changes in 2013,” Laura Concannon, of Hingham, Mass., said as she, her husband, Kevin, and his parents joined hundreds of thousands of people who celebrated the new year in Times Square on Monday.Matias Dellanno, 37, of Buenos Aires, Argentina, stood in the middle of the square with his wife and 3-year-old son. His eyes caught the multicolored lighting illuminating the square just before midnight.

“I feel a completely new hope for 2013,” he said. “It can’t be any worse than last year, when my business lost clients. It was a rough year for everyone. The new year has to be better!”Revelers with New Year’s hats and sunglasses boasting “2013” packed the streets in the 35-degree cold to count down the first ball drop in decades without Dick Clark, who died in April and was honoured with his name printed on confetti and on one of the crystal panels on the Times Square ball.

Syracuse University student Taylor Nanz, 18, said she and a friend had been standing in Times Square since 1:20 p.m. Monday. They hadn’t moved from their spot because “if you leave, you lose your place,” she said.”It’s the first time — and the last time,” she said. “Never again.”Security in Times Square was tight, with a mass of uniformed police and plainclothes officers assigned to blend into the crowd. Police Commissioner Raymond Kelly claimed that Times Square would be the “safest place in the world on New Year’s Eve,” and officers used barriers to prevent overcrowding and checkpoints to inspect vehicles, enforce an alcohol ban and check handbags.

In the state capital of California, a midnight fireworks show was cancelled after a fight at a Sacramento restaurant ended with two people fatally shot and three wounded.But in Las Vegas, police and about 300 Nevada National Guard troops kept the night peaceful, with only 13 people arrested. Sin City hosted sold-out concerts featuring Beyonce, the Red Hot Chili Peppers and the Black Keys, and revelers jammed the Strip to watch as seven hotel-casinos unleashed identical eight-minute rooftop fireworks displays at midnight.

The celebrations on the West Coast took place nearly 24 hours after lavish fireworks displays lit up skylines in Sydney, Hong Kong and Shanghai.In Myanmar, about 90,000 people gathered in a field to watch a countdown for the first time, according to organizers. The reformist government that took office in 2011 in the country, long under military rule, threw its first public New Year’s celebration in decades.In the United Arab Emirates city of Dubai, multicolored fireworks danced up and down the world’s tallest building, the Burj Khalifa.

In Rome, Pope Benedict XVI celebrated with a vespers service in St. Peter’s Basilica to give thanks for 2012 and look ahead to 2013. He said that despite all the death and injustice in the world, goodness prevails. A man scaled the scaffolding around St. Peter’s Square and draped a banner calling on the pope to “Stop Terrorism.”In Russia, spectators filled Moscow’s Red Square as fireworks exploded near the Kremlin. In Rio de Janeiro, revelers dressed head-to-toe in white as dictated by Brazilian tradition flooded onto Copacabana beach for a concert.

In London, the chimes of the clock inside the Big Ben tower counted down the final seconds of 2012 and fireworks dazzled the sky above Parliament Square. Streamers shot out of the London Eye wheel and blazing rockets launched from the banks of the River Thames.But parts of Europe held scaled-back festivities and street parties, the mood was restrained — if hopeful — for a 2013 that is projected to be a sixth straight year of recession amid Greece’s worst economic crisis since World War II.

Festivities were cancelled across New Delhi, the Indian capital, amid days of mourning and reflection about women’s safety after a rape victim died on Saturday.In Times Square, some revelers checked their cellphones for news of lawmakers’ tentative deal to skirt the so-called fiscal cliff, a combination of expiring tax cuts and spending cuts that threatened to reverberate globally. The U.S. Senate approved a bill to avert the cliff well after midnight, though a vote in the House was pending Tuesday or Wednesday.

The recent elementary school massacre in Newtown, Conn., and the devastation from Superstorm Sandy also mingled amid the memories of 2012.”This has been a very eventful year, on many levels,” Denise Norris said as she and her husband, the Rev. Urie Norris, surveyed the Times Square crowd waiting for the countdown show with Ryan Seacrest as host.Seacrest remembered Clark and his legacy, saying it was one that would be continued, and that Clark himself had told him: “Seacrest, the show must go on.”

Yvonne Gomez, 53, a physician from Grand Forks, N.D., glowed as she and her husband, 63-year-old potato farmer Gregg Halverson, took in the festivities in New York.”I couldn’t begin the new year in a more beautiful way,” she said. “I married him two weeks ago and here we are in the middle of Times Square celebrating the new year — two widowers who found each other.”